A Profile of Christian Doyle 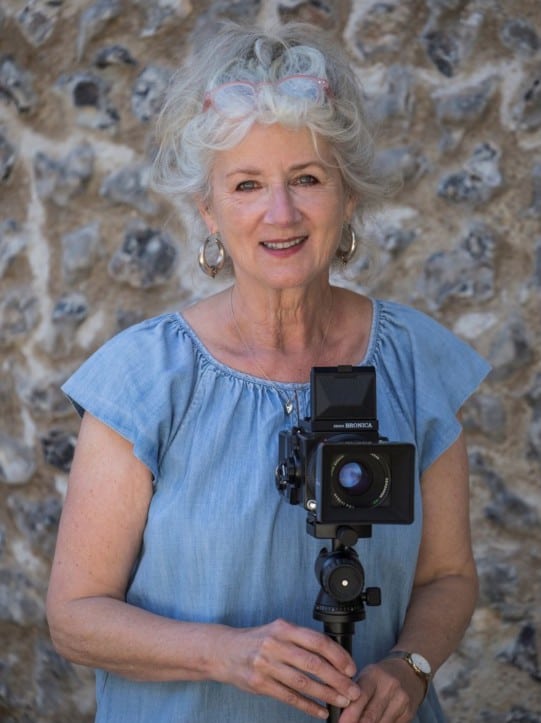 INTERVIEWING Christian Doyle on a sunny evening in the communal garden at the bottom of Arun Street with a bottle of wine seemed like a really good idea. However, transcribing the result the next day it seemed to be less like an interview and more like a roving discussion through every major topic relevant to Arundel and the world at large – very enjoyable but not exactly very structured!

One thing is clear – family features large in Christian’s life. She has four daughters ʻso while there are all the usual ups and downs of family life, there is a lot of love, ready support and shared humour’. Cecily lives in Barcelona, Alexandra and Lucia in Arundel, and Francesca has just moved to Brighton. Having started family life in Bosham, following divorce they all moved to Arundel in 1991 with Peter Smith, who possibly hadn’t realised what he was in for! Their first holiday, a few weeks after meeting each other, entailed a family camping trip to France; 6 children in the back of a Mercedes Estate, everybody getting to know each other as they drove along sharing music on a discman. Nowadays that family has grown to incorporate husbands and wives plus 7 grandchildren and 2 step grandchildren.

Initially they rented the ‘wonderfully romantic Carleton House’ on Maltravers Street, before buying ‘the complete wreck’ that was Walker House opposite the Eagle. At one time all daughters were working in both the bakeries, Pizza Express and The Eagle.

Christian has strong European roots. Her paternal grandmother used to like to say she didn’t have a drop of English blood in her, with her German father and French mother plus all sorts of Italian, Russian and even Latvian relatives. Having been sent to finishing school at 16 Christian stayed on to attend the Cours Etranger at Grenoble University. She then followed up her love of French culture by enrolling at Sussex University in 1995 on the French and European Studies degree course. This involved an Erasmus funded year to Toulouse University. With this European family history and all the benefits of her educational experience, she is saddened by Britain’s decision to leave Europe.

But it is Arundel that has provided wonderful long- lasting friendships and a core of support. It was meeting Amanda Metcalf just after moving in that cemented
the move into photography. Amanda bought some of Christian’s early photos for display in Worthing and Chichester Hospitals. Deciding to get to grips with the technique and art of photography, Christian applied to Central Saint Martins on the newly founded Diploma in Professional Photography. The result of this course was a job at the Royal Shakespeare Company where she spent a couple of weeks behind the scenes. ‘It was amazing,’ she remembers, ‘they paid for two of us selected from the course to stay up in Stratford to produce two portfolios of work.’ The first, ‘In Order of Appearance’, was a black and white series portraying everyone involved in the company, from the actors in costume to the stage hands, scenery painters, wig makers, wardrobe and electricians. The second, ʻIn Rehearsal’, documented
the weeks of rehearsals in the run up to opening night. Christian reflects: ‘It was nerve wracking because I didn’t really know what I was doing – I was caught up in the atmosphere and just learning as I went along.’

Another friend Catrina, suggested she applied the same aesthetic to photographing one of the secondary schools in the area- a fly on the wall approach where the pupils were the stars of the show; the results were then displayed along the corridors as an ongoing testament to school life. I wanted to concentrate on the struggle and the achievement involved for each of them as individuals not so much the prize winners or the star pupils.’ This work proved so successful the commissions spread across West Sussex and eventually to a large comprehensive in the East End of London. An amazing place where 27 different languages were spoken and many of the students didn’t speak English at all. The Head was a brilliant woman who valued everyone and praise and encouragement were everywhere. ‘I went back for three years to photograph them. Interestingly when this Head retired and a less talented person took her place, standards plummeted
and I couldn’t believe how quickly the building became litter strewn and how student behaviour deteriorated in a matter of months.’ She continued the work in schools for the best part of 20 years, basically until they no longer had the budgets available.

Christian has always exhibited her work at the Arundel Festival; ʻDear Cow’, ʻHorse Stories’ and ʻNot Every Story Has a Happy Ending’, a gallery of abandoned dogs, are three of those exhibitions. She sees the thread running through these collections; ‘Cows, horses, dogs share the same characteristics- love, fear, curiosity, strong family bonds and maternal instincts.’ She has become vegetarian as a result of her work and the close observation of so many animals. ‘Against the Tide’, a haunting portrayal of swimmers of all shapes, sizes, abilities and ages for which she was awarded International Photographic Exhibition runner-up 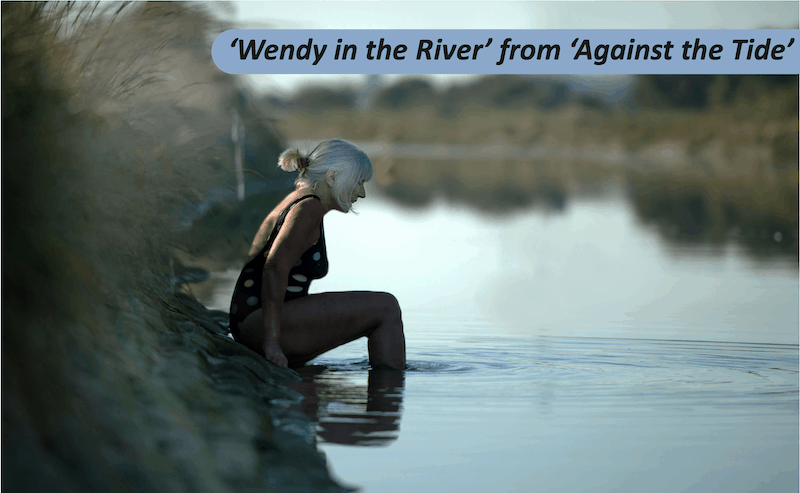 award, is an amazing body of work. ‘I seem to focus on vulnerability – in our farm animals who are just there to be eaten or to produce milk or in our elderly who are often marginalised in society and who can be left to struggle on alone. Some might find it weird or insulting but it triggers the same response in me; the frail 89 year old who swims in the choppy waters of the Blackwater Estuary in Essex in a wet suit that has been repaired and possibly belonged to somebody else, and the young foal or calf taking in the world around it, a bit wobbly and unsure, all hoping for the best really’.

Her ongoing work is ʻThe Waiting Game’, a photographic essay on the role of the groom in polo- their skill and natural affinity to their ponies. ‘It’s wonderful to see the transformation from hairy muddy horse running around the field in early Spring, transformed by these talented men and women into a gleaming glistening speed machine clattering down the ramps of the trucks once the season starts.’ This has of course sadly been interrupted by Covid 19. She was also planning to photograph the 15 or so endangered horse breeds in the UK, mapping out a route to visit Clydesdales, Fells, Shires, Suffolks, Eriskays and Shetlands all over the country. Sadly, that is currently on hold too.

The current crisis did however allow her to develop an installation in Arundel at No 24 High Street. It was her interpretation of ʻIsolating The Elderlyʼ and consisted of photographs of fourteen of her neighbours who were over 70 and therefore supposed to be shielded. Each subject held a handwritten number in front of them which represented the age they felt inside, while their actual age was shown beneath the portrait. It was a brilliant concept and a very striking, moving exhibition. A few examples are shown here – one of which, Pippa 72, won the International Photographic Association Award. The response to the installation was amazing – people queued to get a good view of it and Christian received a large number of appreciative emails, cards and thank yous from the public who had seen it and been cheered at a very worrying and strange time. 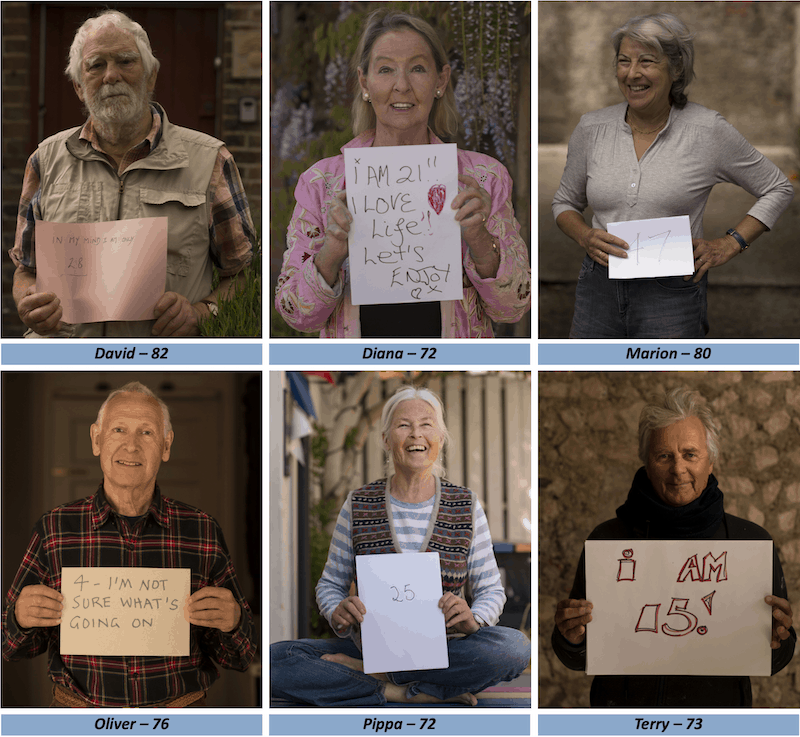