A Profile of Peter Knight 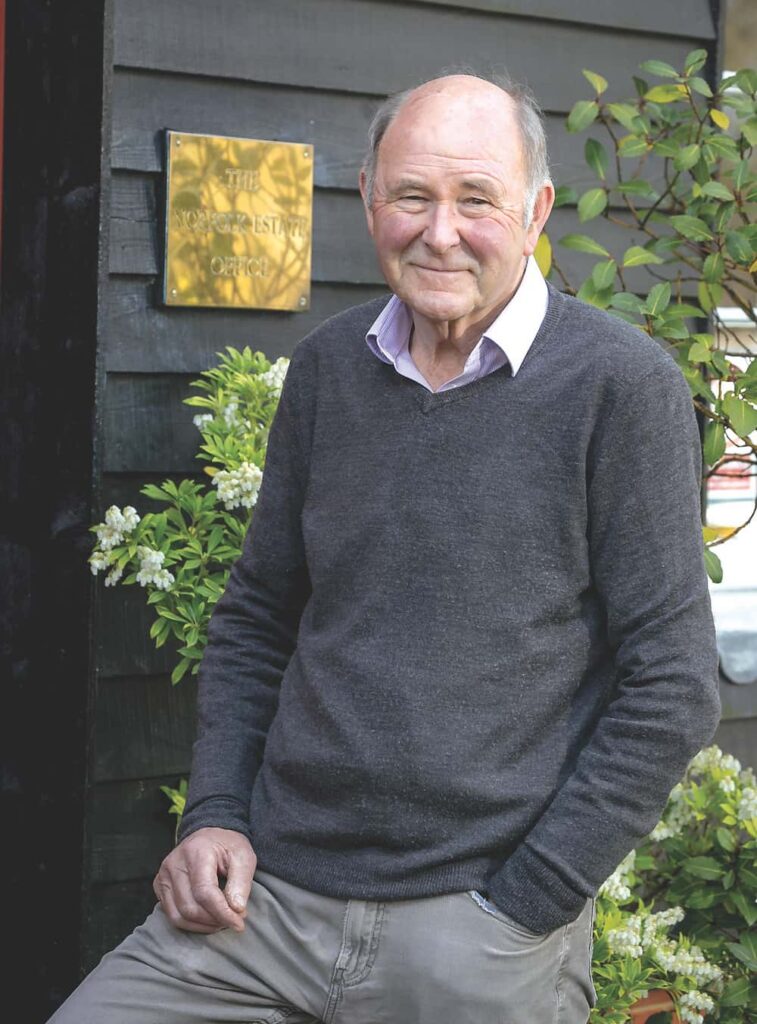 In July Peter Knight will be retiring from his role as Estate Manager of the Norfolk Estate after 36years. Gill Farquharson visited him at the Estates office to hear his reflections on the past and thoughts for the future of the Estate.

‘I’M well past my sell-buy date but, if it were left to the Duke, I’d leave in a box!’ jokes Peter Knight when asked about the timing of his retirement. He and Hilary, who have been married for ‘nearly 49 years’ want to travel, really travel together, and sooner rather than later. ‘I want to try to establish a life outside of this job, which has been a huge part of my life. It’s become a passion and I’m very much the sort of person who lives to work rather than works to live so it’s been a hard decision to make’.

Peter was brought up in Marlborough and went to the Grammar School but likes to say he attended Marlborough College but only to play sport. After school he attended Agricultural College to study Business Management with a clear ambition to be an Estate Manager. His first job was with ICI’s Agricultural Division before he moved into Estate Management at a small estate in the North Cotswolds. It was 1984 when he, Hilary and his son and daughter arrived in Arundel.

It’s ironic that I took over the Estate just as Duke Miles was handing over to Lord Edward and now, 36.5 years later, I’m leaving and Lord Henry is beginning to take over a lot more responsibility for the Estate.

Initially he joined the Norfolk Estate on the farming side but took over as Estate Manager in 1989.

‘It’s ironic that I took over the Estate just as Duke Miles was handing over to Lord Edward and now, 36.5 years later, I’m leaving and Lord Henry is beginning to take over a lot more responsibility for the Estate.’

There have been huge changes on the Estate in the last 30 years. ‘In the past Estates relied on their agricultural income from farming tenancies but that alone wouldn’t sustain them now. We’ve had to diversify into residential and business lets by converting farm buildings for the purpose. We’ve developed two fisheries – one for coarse fishing and the Trout Farm ponds for fly fishing.’

Environmental issues have also come to the fore during that time. ‘I’m very proud of our environmental work which started properly in 2002 – I personally think it’s second to none. It’s not rewilding or organic farming it’s a middle of the road approach called LEAF – Linking Environment and Farming. It’s a good balanced approach and the results on our surveys of red listed birds, plants and insects, mixed livestock and arable and good rotational farming support this – all show mega increases. We try hard not to use excessive pesticides on the Estate where possible – it’s become part of our ethos now.’

He estimates that the area of the Estate devoted to environmental issues now is 12-15% with the rest producing food in one form or another.

Maintenance on the Estate is a huge part of Peter’s role. The great storm in 1987 that devastated vast swathes of the trees was one of the low spots. It took 5 years and the planting of 70,000 trees for the woods in the park to recover. The park wall, which is 8 miles long, was also badly damaged and had to be repaired. The upkeep of the wall is a large annual expense but as Peter expresses it ‘The family see themselves as custodians of the Estate for their lifetime. Maintenance is an essential part of that role.’ Now the challenge is the loss of so many trees to Ash Dieback disease (see The Bell’s March issue Page 22). ‘There has been an enormous amount of felling done in the last year – it’s very sad’. Large areas of the south east are full of ash trees and you can’t do anything but fell them and as yet we can’t replace them. We’ve cleared large areas of ash from the roadsides where they would be a hazard if they toppled over.’ There is also a predicted lethal virus going to attack beech trees across the country ‘in the UK we’ve only got ourselves to blame; we’ve bought imported plants and seeds over the years which have introduced these problems.’

The government’s agricultural policy of course plays a pivotal role in the farming industry and has changed many times during Peter’s tenure. He describes the latest iteration as ‘the biggest change since the end of the Second World War and certainly since we joined the Common Market. Farmers have always been supported by subsidies and, although people don’t like to believe it, we have relatively cheap food in this country. The Agriculture Bill passed in November last year set great emphasis on the environment and changed the way farmers would be paid in future. We are currently being paid on area farmed which I think a lot of people would agree is not sustainable. Essentially just because you have a large acreage you have a larger share of the £3.2 billion that the EU Common Agricultural Policy paid in the UK. The new scheme will be reducing this by 2024 by 50% and by 2027 it will have gone completely. The new scheme has yet to be brought forward by DEFRA but we’re all waiting with bated breath to see what they do in the Environmental Land Management scheme they plan to introduce.’ This will mean a shift in emphasis to the quality of the air, the soil and the water on the land ‘and rightly so. I just hope it doesn’t mean going too
far and allowing more imported food to come in from inferior welfare systems. We currently only produce 60% of the food we consume. If that drops further, standards must still be maintained.’ He cites chlorinated chicken and beef injected with growth promoters as being two examples of practices not allowed in the UK which most people find unacceptable. ‘It’s a big change – there is a new Environmental Bill due out next year so we will see what that reveals.’

Whatever next year brings, it will not be Peter’s problem. His current role has been split now as it proved difficult to find someone to fill both jobs. There is a new Farm Manager, Conor Haydon, son of Ryan Haydon, a well-known tenant farming family from South Stoke and Offham. Conor had previously been Farm Manager at the Goodwood Estate. ‘The new Agent for the Estate starts in the middle of July – so at the end of that month I will leave but it will be very hard to let this part of my life go.’ Interestingly at the end of the year Nigel Draffan, the Agent of the Angmering Estate, is also retiring.

One of Peter’s notable highlights of his tenure was the Millennium celebrations at the Castle, which by all accounts were incredible. Everyone in BN18 received an invite and he recalls ‘We served 23,000 nibbles and 18,000 gallons of mulled wine!’. This was followed by concerts in the summer with performances from Texas, Girls Aloud and Catherine Jenkins. ‘The problem was that we only had a licence for 4000 on the Lower Lawns and the costs of these acts were high – we simply couldn’t cover those and the insurance costs in the end so it became untenable- but it was great fun while it lasted!’

Outside of the Castle staffing which varies according to the season, the Estate currently employs 25 people ‘but we don’t have an in-house building team like some Estates we have local builders who support us and we pull in specialists when we need them.’

Contrary to popular belief the Norfolk Estate’s pheasant shooting is limited now to 12 days of which half are available for let and half reserved for family shoots.
It seems quite hard to help people understand the challenges on the Estate. ‘I’ve tried over the years doing public meetings and talks about our environmental work – preserving habitats, food source and using legal predator controls. Keeping the number of foxes down, for example, is important if you are going to maintain and grow the ground-nesting bird population such as lapwing, corn bunting and skylark. Nationally there is an 80% decline in bird, insects and pollinators and hopefully the proposed Environmental Land Management Scheme will try to address these problems and incentivise farmers and landowners to do more.’

The Covid lockdown has posed particular problems in the last year as more people have come to the Park, many bringing dogs. ‘Not everyone controls their dogs and it causes problems with the sheep and cattle. Also Whiteways café and car park and Swanbourne Lake have been huge problems because of the toilets, (which were impossible to keep clean according to Covid regulations), and the sheer numbers of people. Plus there’s the problem of dog poo bags which are used and left in the Park for us to clear up!’

It’s a commercial decision which got 80% approval on the Neighbourhood Plan and we’ll know soon whether or not it will go ahead. Arundel Town Council are backing it and people say Arundel has to take its fair share of housing development. But I totally get the opposition because I live there too.

Peter has been involved in many major changes in his time – the development of what was a tarmac carpark into what is now the Collector Earl’s Garden and the organisation of the land for the building of Arundel Museum to name just two. However the current development plans for the field above Ford Road has put Peter in an unenviable position. Eight years ago he and Hilary moved out of the Estate home and bought their house at the top of Torton Hill. It is now right next to the proposed development – he agrees he is stuck between ‘a rock and a hard place’. ‘It’s a commercial decision which got 80% approval on the Neighbourhood Plan and we’ll know soon whether or not it will go ahead. Arundel Town Council are backing it and people say Arundel has to take its fair share of housing development. But I totally get the opposition because I live there too. I’ve taken my fair share of flack as you can imagine. We haven’t gone to a developer and will appoint our own site manager, quantity surveyor and smallish builder. 30% of the houses will be affordable and within a Community Land Trust and the architecture will be seen as a legacy for the Estate.’

We move on to talk about other developments in the area- the A27 by-pass and planned Rampion 2 wind farm proposals – both of which will, if they go ahead, have significant impact on the Estate. But all of this will no longer be in his in-tray from the end of July – his life after the Estate beckons and he smiles, ‘I’m really looking forward to it now.’