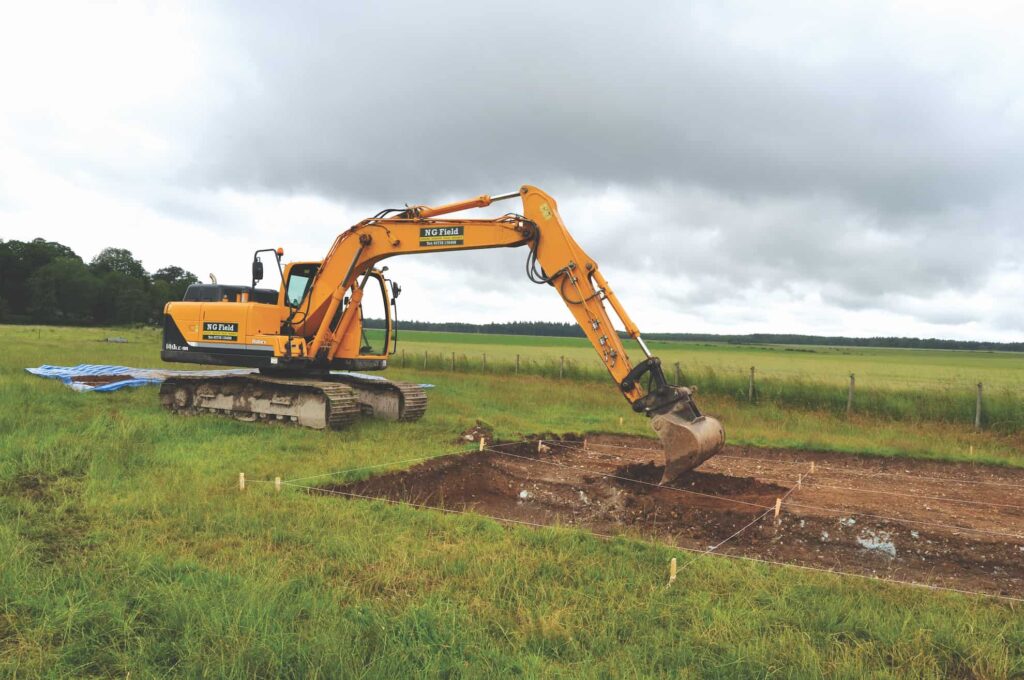 Image above: The initial excavation taking place. Large amounts of corroded aluminium can be seen in the centre section of the excavation.

THE 21st of June this year saw the start of the second phase of the project to search for two missing in action crewmen of an American B-24 Liberator bomber that crashed near Park Farm, Arundel on the 22nd of June 1944.

The four-week project ran from 21st June to 16th July 2021 and was carried out by the American Veterans Archaeological Recovery (AVAR) group. AVAR is run by Dr Stephen Humphreys an ex United States Air Force officer and comprises of a core AVAR team along with both US and British veterans. University students, the Seller family, myself (Co Project investigator), local aviation historian Mark Hillier, Arundel historian Mark Phillips and community volunteers who also assisted with the project.

The initial excavation phase was carried out in September 2019 by AVAR. This yielded much useful information, and large amount of aircraft material was recovered. It was determined that a follow up excavation would be required however to complete the excavation fully. This is the policy of the US Defence POW/MIA Accounting Agency (DPAA), the US Defence Department agency tasked with the recovery of missing US Forces personnel. The Arundel B-24 project was being carried out by AVAR on behalf of the DPAA.

The plan to return and complete the excavation was thwarted by the COVID pandemic and had to be carefully planned to allow it to commence when safe to do so in 2021.
The veterans attending from the USA were required to quarantine in advance of the project starting and were accommodated at a hotel in Petersfield. With the all clear given, the team assembled at the farm on 21st June. This team comprised AVAR members (including some who had attended the 2019 project), UK veterans, University of York students (led by experienced archaeologist Steve Roskams) and local volunteers. They were given unstinting support from the Seller family who farm the land and without whose support the project would not have been possible. 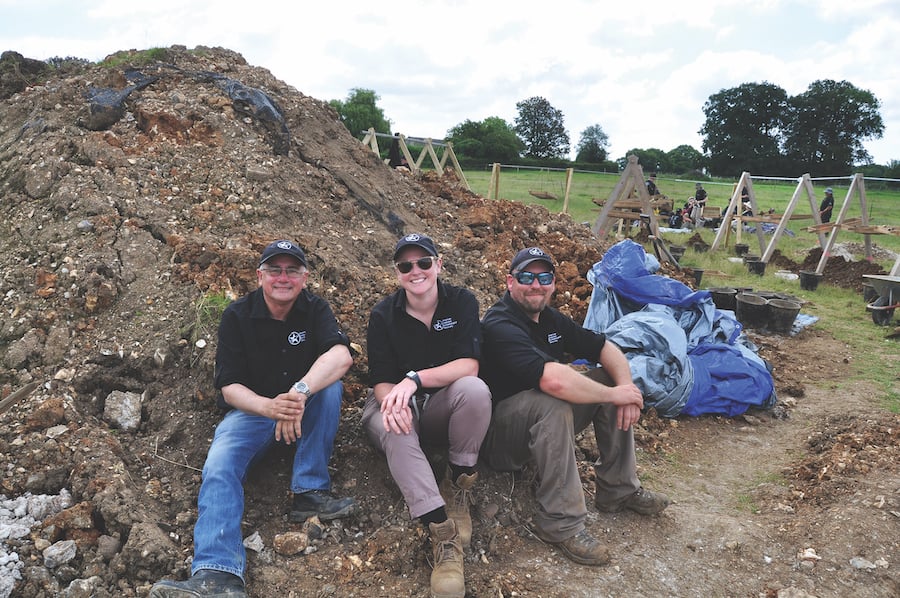 The initial day comprised of setting up and waiting for project equipment to arrive from Germany (supplied by DPAA). The second day, 22nd June, saw operations commence in earnest. As the team assembled, they were able to witness an overfly of the site by wartime aircraft belonging to the Boultbee Flight Academy. This comprised of two Spitfires and a Harvard trainer aircraft. The sight and sound of these aircraft passing overhead was extremely evocative. It was a great precursor to the excavation and really focussed everyone’s mind on the job ahead. There cannot be too many projects where, during an excavation on a WW2 crash site, aircraft from the same era are flying overhead. 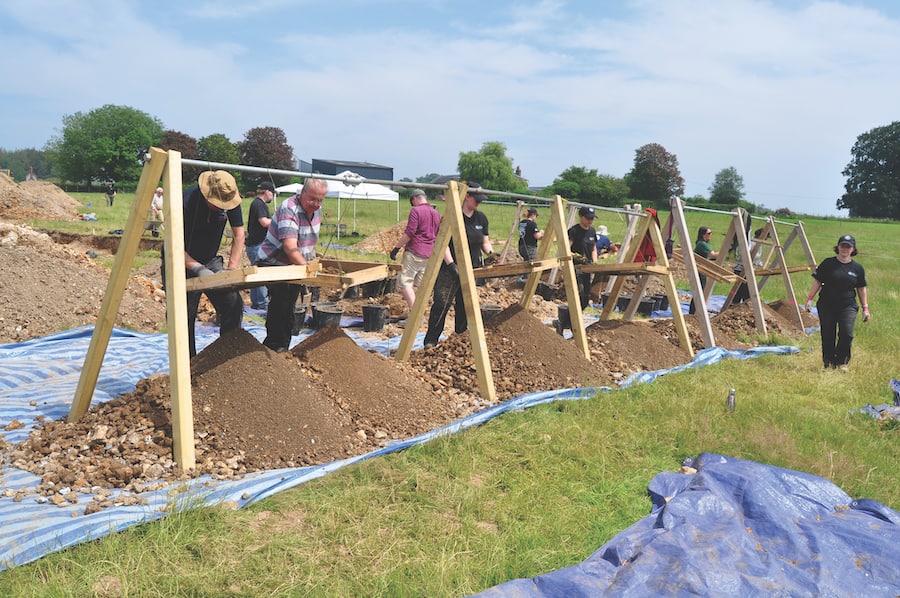 Image: The team at works sieving the excavated material

The initial phase of the excavation consisted of removing 30cm of topsoil using an excavator (provided by local agricultural contractor Nick Field) over a large area to allow the crash site to be better understood. The area of the previous excavation was recorded and known, but a metal detecting survey carried out in 2019 had indicated a large area where metal objects were known to exist. This was to be an area of particular focus.

Once the initial area had been cleared, a linear feature displaying aircraft parts and a significant amount of corroded aluminium became apparent. The crash site had previously been investigated by the Wealden Aviation Archaeology Group in 1974. Larger parts of the aircraft had been removed during that time including engine parts propellers and other items. A separate excavation also took place in the 1980’s to recover a remaining engine. These excavations resulted in material being re-deposited at the completion of the dig. It was the location of the previous excavation area that was being sought. The 2019 project had excavated part of the 1974 dig site. In June the remaining sections of the 1974 dig were also excavated.

The excavation method comprised of removing soil using a mechanical digger and placing in piles (with the location context being recorded). The material in these piles were then triaged using sieves mounted on frames- all the material being carefully examined. This is extremely physically and mentally demanding work and all those working on the frames deserve huge credit.

The crash site was excavated under license from the UK government and is formally regarded as a forensic recovery site. As such, out of respect to the missing individuals and any existing relations, no details can be released in relation to specific finds discovered during the project.

On completion of this project, the AVAR Team have now moved straight from the UK to work on another MIA project in Sicily.

It is hoped that the combined results of the 2019 and 2021 project phases will result in a successful outcome and enable two US servicemen missing for 77 years to be identified and buried with the honours they deserve. The site at Arundel will however continue to serve as memorial to the crew and all their comrades who gave so much for us to be free. Lest we Forget.

Arundel Museum will be holding an exhibition about the B24 flight and crash in November this year.

Image: An aerial view of the site taken during the excavation. The large holes made by the impact of the aircraft can be seen. On the right two engine holes and on the left the fuselage hole. The Two renaming engines holes have yet to be excavated. These were all excavated archaeologically and formally recorded. (Image by : Mark Phillips).