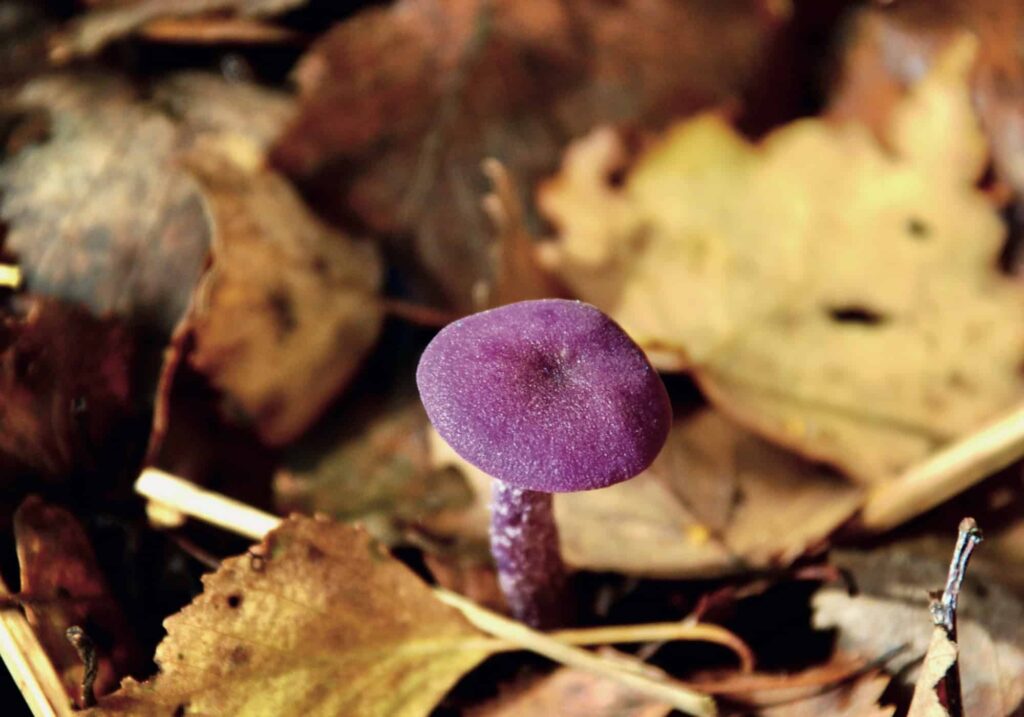 A spotlight on the fifth kingdom

AS the season changes and the brown, red and yellow leaves of Autumn show themselves on the trees, a profusion of fungi arrives around Arundel. At the start of Autumn with the sun still retaining warmth and strong light, dappled patterns are created on the leaves carpeting the woodland floor. Between the dappled shadows on woodland banks and on the fallen branches of trees, toadstools, puff balls and brackets appearing in the local woodlands herald the start of the fungi season.

Many Arundel residents growing up around the ancient woods around the town will have seen a variety of local toadstools. The fruiting bodies found among the leaves and on trees as toadstools or brackets are parts of a larger hidden organism. What most people think of as fungi are actually the fruiting bodies of intriguing organisms. Neither plants nor animals, they belong to their own distinct kingdom. The long living part of the fungus is shrouded from view under the substrate (usually soil or decaying wood, sometimes droppings or seeds and nuts) from which the fruiting body emerges. This hidden part of the fungus is a complicated intricate network of threads (hyphae) that are known as a mycelium that will connect through the woodland coalescing with tree roots and other plants. This mycelium will sometimes be the basis for ‘fairy rings’ of toadstools in woodland, with the diameter of the ring giving a rough guide to the age of the fungal organism which has expanded out from a point in the centre of the ring.

The only task of the fruiting bodies is to help the fungi spread and their existence is fleeting, transient. They emit microscopic reproductive spores for dispersal by the breeze, a little like seeds from a tree. Mushrooms in the woodland will try to disperse spores as far from the parent as possible to minimise competition for nutrients, and to do this their main tool is water. Prior to ejecting spores, mushrooms will release water vapour which cools the surrounding air causing it to drop and flow away from the mushroom, which creates lift to transport spores.

Spores landing in the right conditions will produce new fungi…though this process can take years as the fungi waits for the correct combination of temperature, humidity and light. Some fungi can be considered relatively rare on a site but when conditions allow produce a bumper crop of fruiting bodies for just one season.

The ancient managed woods around Arundel are particularly beneficial for fungi because they have the most stable soil systems and these conditions prevail even in the face of the regular cutting and coppicing of trees over the ages. The fungus will supply minerals and other nutrients from the soil mainly in return for water and carbohydrates generated by photosynthesis. Their role in the cycle of life within the woods cannot be underestimated…fungi are practically the only thing apart from some bacteria that can devour the tough lignin material contained in dead wood. Crucial for all nutrient cycles, they break down and recycle dead biomass in the environment, and help feed water and nutrients to the roots of woodland plants with many trees and plants relying on a biological partnership with fungi to thrive and flourish. This interaction forms a sort of underground communication system that has been coined as ‘the Wood Wide Web’.

Some woodland species are easy to identify, may be well known in the area and are worth looking out for around Arundel. A good example is Beefsteak fungus (Fistulina hepatica). Growing as a bracket on deciduous trees, when cut it displays all the visual characteristics of marbled beef. Or perhaps Chicken of the woods, a spectacular yellowy orange multi-layered bracket. The similarly named Hen of the woods looks just like a feathered poulet sitting on stumps of oak. Everyone likes a purple toadstool, and so look out for Amethyst deceivers (Laccaria amethystina) or Wood blewits (Lepista nuda). Smell can be important too, so a waft of aniseed can come from an Aniseed funnel mushroom (Clitocybe odora). Yellow Sulpher knights Tricholoma sulphureum previously know as the Gasworks mushroom give a slightly less enjoyable experience!

While everyone can enjoy the diverse colours and shapes of woodland fungi, no one can identify all fungi they find. Not only can some specimens be non-typical, to further complicate matters, many fungi will significantly change shape or colour as they mature, and most experts will concentrate on specialist areas. The biological of fungi is vast, with upwards of some 17,000 species so far described scientifically in the UK. Many have only recently been given names in English, though these can be very evocative…Crystal brain fungus (Myxarium nucleatum) ; Candlesnuff fungus (Xylaria Hypoxilon); Witches butter (Exidia glandulosa) or even Hairy nuts disco (Lanzia echinophila)! It’s an area of scientific discovery where amateur citizen scientists can still find and describe a new species, and with the advent of DNA analysis to the field, it is a scientific area that is growing exponentially. Large fungi visible to the native eye within woodland are only a small fraction of the fungi kingdom with most fungi producing fruitbodies that are so small they need microscopy to identify or producing no fruiting bodies at all.

One group of enthusiasts active around Arundel are the Sussex Fungus group. These are people with a scientific interest in toadstools, with a wide range of expertise from enthusiastic amateurs to professional mycologists (fungal scientists) who record species for inclusion in scientific databases. Their forays are not for collecting fungi to eat, but rather concentrated on conservation and education, and getting people to understand how important fungi are to conserving the landscape. Many fungi appear to be vanishing through depletion of woodlands, habitat loss alterations in agricultural management and over-picking for the table, with all this happening before there is a clear understanding of what exists in the landscape. The group helps novice enthusiasts understand the scope and depth of the kingdom through organising forays to which anyone is welcome, microscopy classes informal advice and even a book club! Dates of forays and further information can be found at https://www.sussexfungusgroup.co.uk/