We play a form of french boule called Petanque

Pétanque, a simple idea involving getting a metal boule as close as possible to a jack (a cochonnet) can be enjoyed at a straightforward level or can be played to a good degree of sophistication and competition. Players of all ages and experiences play and new members are especially welcome to come and try the game. We can supply boule of varying sizes and weights so you can see which is best for you.

Situated in the Arundel Football Club grounds.  It has an enclosed terrain, wooded on one side with a picnic area next to the terrain.  Entrance is opposite main entrance to Arundel Castle. through the pay and display car park (parking in Mill Road is free).  Football Club gates are in the NE corner of car park and we are in the NE corner of the football grounds behind the stands.

During the brief spell of a sort of freedom Arundel Pétanque Club managed to hold three in-house competitions  - The Singles. The Doubles (with randomly drawn partners) and The Pick-Your-Own Doubles. The Singles was played over 3 dates with each contestant playing 3 timed games Each Doubles event also consisted of 3 times games with finals for winners and runners-up and 3rd/4th places. We were lucky with all games weather-wise, except the Pick-Your-Own Doubles when the rain was horizontal at times but we battled through!

There were 20 entries in the Singles. It was good to see so many friends after the long break. There were some close games with Geoff Sully as undefeated victor with 3 wins +15

24 entries into the Doubles saw 12 teams enjoying a warm, sunny morning  -  perfect pétanque-playing weather. Only 1 team won all their 1st round games. Angela and Kath ended up with 3 wins +18 beating strong rivals Geoff Sully and Chris Warren-Adamson to 2! These two teams met again in the final, with the girls again coming out on top.

The Pick-Your- Own Doubles was the event with the horizontal rain  -  but only for part of the time! 20 entries again this time and the results are as follows…..

(Getting their own back!)

All games were played within Covid regulations. Let’s hope we can play again soon

We play on:
Wednesdays from 10am Weather permitting - look out for the Secretaries weather report
Sundays all year 10.30am - 1.00pm - meet in the football bar afterwards for a chat and a drink. 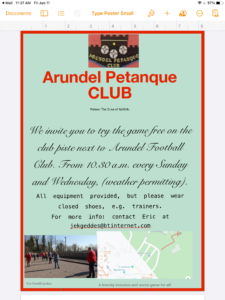