Built astride a hill the Cathedral sits majestically, overlooking the ancient town of Arundel

Henry, 15th Duke of Norfolk, Earl Marshal, was responsible for the commissioning of the present building in December 1868. The architect was Joseph Hansom, known principally for invention of the Hansom Cab, who had designed a variety of Catholic churches, convents and other buildings.
Construction began in late 1869 in French Gothic style and was opened on 1 July 1873. Originally the church was dedicated to the sixteenth century Italian priest, St. Philip Neri (1515-1595). St. Philip’s was seen to be a parish church for the Catholic community of Arundel and the surrounding villages in the Diocese of Southwark. With Duke Henry’s devotion to St. Philip Neri, an altar was built with stained glass windows above showing scenes from his life as well as a statue.
With the new Diocese of Arundel and Brighton created in 1965 the church became a Cathedral, with the dedication changing to ‘Our Lady and St. Philip Neri.’ Subsequently in 1971, the remains of the martyred 13th Earl of Arundel, St. Philip Howard (1557-1595), were brought from the Fitzalan Chapel in the grounds of Arundel Castle and enshrined in the Cathedral.
The Cathedral’s dedication finally changed in 1973 to ‘Our Lady and St. Philip Howard’. This followed the canonisation of Philip Howard together with 39 English and Welsh martyrs of the Reformation on 25 October 1970.
Once a year the church celebrates the feast of Corpus Christi – the Body and Blood of Christ, 60 days after Easter. A world famous Carpet of Flowers is laid for visitors to see for a few days prior to the Mass and a procession of the Blessed Sacrament to Arundel Castle.
The Cathedral is the catholic parish church for local residents, as well as being the regular setting for Diocesan Masses and services. Concerts by local choral societies and organ recitals are also held throughout the year. 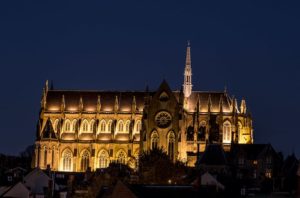 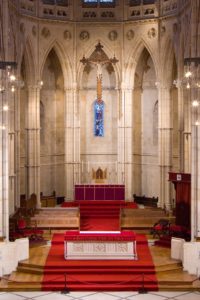 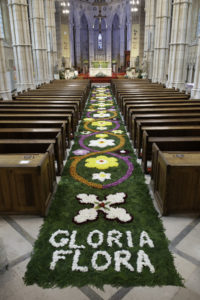