Would the real Maison Dieu please stand up! 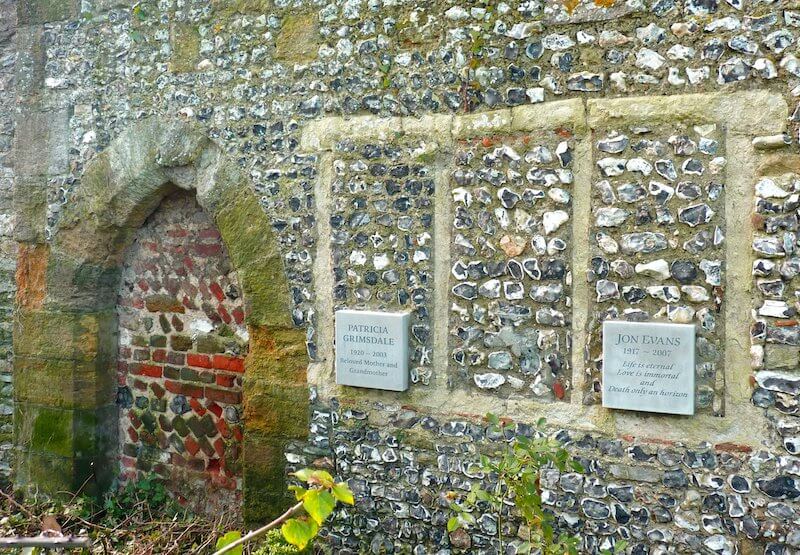 In my last article I wrote about the ruins next to the Post Office and the Museum in Mill Road and how they had been misidentified as the Maison Dieu until 1990 when Tim Hudson’s excellent research clearly showed that these were in fact the ruins of the Blackfriars Dominican Friary. The confusion arose because of historical records describing a large religious building in the town known as the Hospital of the Holy Trinity, the Alms-house and the Maison Dieu.

So, where was this illusive Maison Dieu really located? Hudson’s detailed research was able to deduce this with reasonable certainty. It is recorded that the Maison Dieu was founded with the support of the College of Secular Canons which in c1380 was attached to the parish church. This College had nothing to do with teaching; it was simply a group of lay choristers whose principle duty was to sing masses for the soul of their founder and his family. The main college site now contains the Priory residential home and the Priory theatre in buildings that were mostly rebuilt in the 18th & 19th century.

The original statutes for the Maison Dieu indicate that the building was close to the church and indeed, it would have been a far more logical location than down by the river as all but the severely ill inmates were required to attend noon prayers in the Fitzalan chapel and carry out manual tasks such as weeding the nearby churchyard. Considering all the inmates were not in the best of health, the weeding alone would have been a difficult enough task without having to climb up and down the steep High Street.

The college buildings near the south –east corner of the church partly survive today and were built in a mix of flint and stone similar to the church which was also rebuilt after 1380. Very little evidence remains of the Maison Dieu but if you head into the grounds of St Nicholas church and walk towards the far left hand corner of the church yard you will see two flint and stone walls at right angles with blocked windows and doorways of a 14th/15th character which closely match the style of the church and college. These outer walls are believed to be all that remains above ground of the Maison Dieu.

There is a record from an unknown visitor to the town in the 1720’s who mentions an “old priory” north-west of the church that was being demolished and its stone being used to replace the dilapidated old wooden town bridge. This does fit with known information as the wooden bridge was indeed replaced by a stone one in 1724 and it is traditionally believed that much of the stone came from the ruins of the Maison Dieu, although previously assumed to have been the ruins by the river.

The main building of the Maison Dieu would have stood in the area where the Collector Earl’s garden is now located and would have likely been built in a rectangular style. There are other records from the early 19th century which note that numerous human bones were unearthed, apparently from a cemetery. Historian Tim Hudson is convinced this location is correct and asks ‘What is more likely that this was the site of the Maison Dieu? It would then have formed a group of three contemporary buildings in the same style and materials with the church and college.’

Although the location of the Maison Dieu was misidentified for many years, we still know a reasonable amount about its establishment and key functions from historical records. Richard, Earl of Arundel had originally planned to found a hospital or similar along with the college he was contemplating. Unfortunately he died in 1376 leaving both to be carried out by his successor who completed them c1395. It was one of 28 medieval hospitals in Sussex although ‘hospital’ more in the sense of ‘hospitality’ and was a sort of medieval care home for poor/older men who met the strict criteria.

Details of the original statutes of the Maison Dieu still exist and are referred to by local Historian Tierney in his 1830’s publication on the History of the Castle and Town of Arundel. A ‘priest’ under the title of ‘Master’ was to preside and act as Superior and Chaplain and who was assisted by a Prior elected by inmates from among themselves. The Master had to reside constantly within the walls of the hospital and was overly responsible for all its functions which he was required to enforce either by, ‘admonition, correction or expulsion’. The brethren were required to wear a brown woollen gown with a hood, similar to a monk, and received a gift of shoes and sock each Christmas and linen items at Easter.

The inmates were to be twenty unmarried or widowed poor men who were either too infirm or old to provide for themselves.  They were required to be men of moral lives and edifying conversation, and were required, as a qualification for their admission to know the Pater-noster (Lord’s Prayer), Salutation (The Hail Mary) and Credo (Creed) in Latin. Preference would be given if they were servants or tenants of the patron.
It was not an easy life. A typical day for the inmates would be rising at 5am (6am in winter) to unite in prayer which included thanking their benefactor. Idleness and ‘tale bearing’ was discouraged and the morning tasks such as gardening, tidying the churchyard and nursing the sick were allocated according to strength and ability. Those who were no longer able to carry out manual work were expected to ‘entertain their minds with prayer and meditation’.

Around noon, all were summoned to prayer and then dinner. The afternoon continued with the allocated tasks until they were again summoned to prayer followed by refreshment and evening meal. At 6pm (6.30pm in winter) the bell proclaimed the hour of rest. Everyone would once again give prayers of thanks and the whole community, with the exception of the Master and his Prior, retired for the night.

Like many religious establishments in England the Maison Dieu came to an end when it was suppressed during the Dissolution, (c1546) the buildings mostly demolished and in this case, the lands granted to Henry Earl of Arundel.

With thanks to notes and articles by Tim Hudson and Mark Aloysius Tierney.