Arundel Castle, the Dukes and the Earls: A Potted History 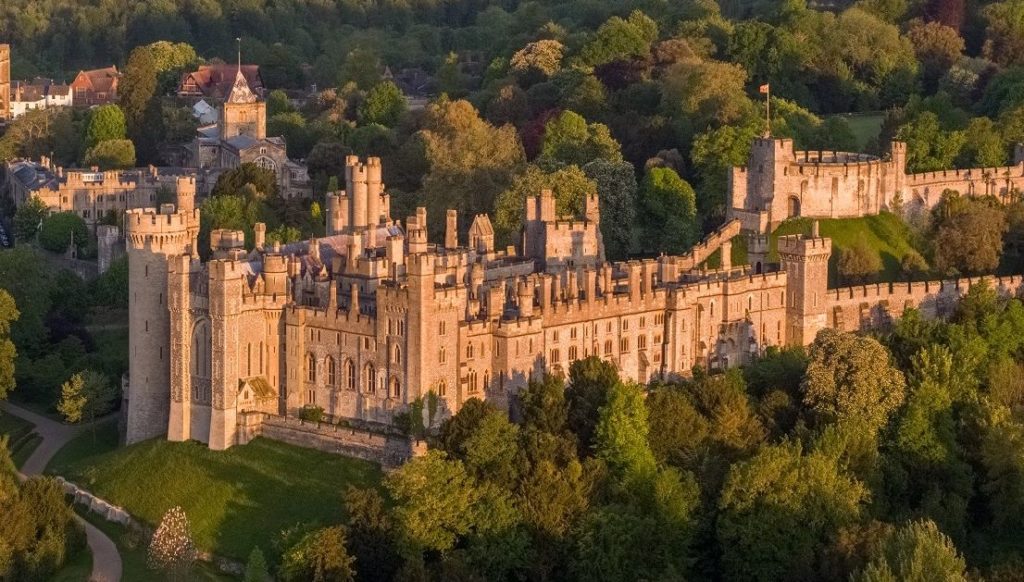 Arundel Castle is perched on top an outcrop of land overlooking the river Arun Valley and coast. It is the ideal location for a defensive building to help protect England from invasion.

William the Conqueror gave Arundel, and a third of Sussex, to Roger de Montgomery as a thank you for his help during the Norman Conquest in 1066 on the understanding that he built a castle for defence.  As Earl of Arundel he built a large motte or mound with a wooden keep or tower on top for accommodation along with upper and lower baileys (or enclosures) as living quarters for soldiers, animals and for storing equipment. He later added a gatehouse and replaced the protective walls with stone.

William rebuilt the wooden keep in stone which made for better protection and far better living quarters.  The first siege of Arundel occurred when Matilda, daughter of Henry 1st, came to claim the throne of England. Adeliza infuriated King Stephen by receiving her stepdaughter Matilda at Arundel castle.  Stephen laid siege to the castle but for unknown reasons, allowed Matilda to leave freely and travel to Bristol, which no doubt saved the castle from damage.

After William and Adeliza’s deaths the castle fell into the hands of Henry 2nd (Matilda’s son), who built the south range with a Great Hall, a chapel and living accommodation.  After a few years, the castle was passed back to the de Albini family who held the title through five earls until 1243.

The castle then passed to the Fitzalan family, through the marriage of Isabel, sister of the last earl to John Fitzalan, lord of Clun and Oswestry. In the south bailey, the Fitzalan earls built a quadrangular house with a Great Hall and more accommodation incorporating the old south range.  They also added the Barbican to the Gatehouse and built the Bevis or Beaumont Tower.

The 3rd and 4th earls built the College of the Holy Trinity which included a large chapel (now known as the Fitzalan Chapel) as well as rebuilding the existing parish church. These two buildings are separated by iron gates that are only opened on very special occasions.

There were 12 Fitzalan Earls between 1272 and 1572, who all made various changes to the castle architecture.  The 12th Earl’s only son died aged 18 in 1556. The Earl also had two daughters, Jane, who was married to Lord Lumley, and Mary.

Mary married Thomas Howard, 4th Duke of Norfolk but died in 1557 after giving birth to a son, Phillip.  This meant that Philip became the heir of the 12th Earl Arundel.  This is how the Fitzalan Earls of Arundel became linked with the Howard Dukes of Norfolk.    Due to the 4th Duke’s involvement with Mary Queen of Scots which led to his execution in 1572’ the title of Duke of Norfolk was attainted/suspended.  As the Duke was executed for treason his son Phillip could not inherit his title, but he was still entitled to the Earldom of Arundel through his mother, daughter of the 12th Earl.

Phillip, 13th Earl, was, in turn, imprisoned in the Tower of London for his faith and died there in 1595 never having seen his son who was born while he was in prison. The title was again attainted!  His son Thomas only became 14th Earl in 1604 when his lands were returned to him by James 1st.

Thomas retained the castle and the Fitzalan Chapel in good repair and became known as “the Collector Earl”.  He brought home a great number of historic artifacts and artworks from his visits to Europe, a few of which are still in the castle today. He also brought the artist Anthony Van Dyke to England to paint for him.  Arundel has many paintings by Van Dyke who was in great demand by the English gentry and the Royal family.  At the beginning of the English Civil War in 1642, he travelled to Europe to take Mary, daughter of Charles 1st, to her husband William of Orange.  He later went on to Padua in Italy where he remained until his death in 1646.

Thomas Howard, 5th Duke of Norfolk did not regain the title until Charles 2nd came back to the English Throne in 1660.  He spent his life in Padua and his estates were run by his brother, Henry.  In 1677 Henry became 6th Duke although only for a few years as he died in1684 when he was succeeded by his son Henry as 7th Duke.  The 7th Duke was childless, and the title was inherited by his nephew, Thomas, who became the 8th Duke.

Thomas carried out reconstruction work at the castle including repairing the buildings around the south quadrangle. He also drew up plans for a major new house there and only used the castle for a shooting lodge, visiting just a few weeks a year.  The 8th Duke died in 1732 and was succeeded by his brother Edward as 9th Duke.

Edward spent most of his time away from the castle renovating Worksop Manor, he died in 1777.  All the direct line heirs of Edward had died before him, so the title was inherited by a cousin, Charles Howard of Greystoke and the Deepdene, great grandson of Henry Frederick, 15th Earl of Arundel, who then became 10th Duke.

Charles liked Arundel and willingly funded the restoration of the Castle.  He died in 1786 and his son succeeded him as 11th Duke.

Charles, 11th Duke was a larger than life extrovert friend of the Prince Regent and known as the Drunken Duke.  He extended and improved the Arundel estate, restoring the castle including the Barons Hall and creating the present park.  He acted mainly as his own architect and his design was in the Perpendicular Gothic/Norman style.  His most notable interior is the Library, occupying part of the shell of the Tudor Long Gallery,  which is still in the same form today.  It includes the books of the 9th Duke and many others collected by the 10th Duke.  He died in 1815 without any children so the title went to his third cousin, Bernard Edward Howard of Glossop another descendent of Henry Frederick, 15th Earl of Arundel.

The 12th Duke extended the Great Park and cleared away houses at the top of the High Street and moved the route of the London Road to improve the castle grounds. He repaired the damaged Fitzalan Chapel and he also built the new Town Hall to accommodate the town council who had been meeting in a room located in the Fitzalan chapel.  The Duke did not live at Arundel and did not continue with the main building works.  He died in 1842 and was succeeded by his son Henry Charles.

The 13th Duke moved into Arundel as soon as he inherited and built many farm buildings and planned the model dairy at Swanbourne Lake, he also carried out various improvements to the castle and erected the wall and gatehouse at the top of the High Street.  In December 1846 Queen Victoria and Prince Albert visited Arundel for three days.  The castle was redecorated for the occasion and she appears to have enjoyed most of her stay even though she was not overly impressed by the castle.  Henry Charles died in 1856 and his eldest son Henry Granville became the 14th Duke.

The 14th Duke planned more improvements to the castle but only the new chapel between the Barons Hall and the Norman gatehouse were completed.  The Duke died in 1860.  His eldest son, Henry inherited the title at 13 and was responsible for much of the Castle we see today.

The 15th Duke built the huge Catholic church of St Phillip Neri, in London Road, which later (in 1965) became the cathedral of Our Lady and St Phillip Howard. The Festival of Flowers at Corpus Christi is held here each year in June.   He also undertook a comprehensive building program at the castle, including new kitchens, plumbing with eight bathrooms and 65 toilets. The castle was one the first English country houses to have electric light. Duke Henry also created the private stunning chapel next to the Barons Hall and repaired the keep along with the Barbican, Gatehouse and Bevis tower. The castle as you see it now is very much the 15th Dukes legacy to Arundel.

When Henry died in 1917 his son Bernard, inherited the title as 16th Duke of Norfolk, he was 9 years old!  Duke Bernard and his wife, Duchess Lavinia made changes to the castle after their marriage, adding many modern comforts.  They also added a racing stables to the estate, which became extremely successful.

During the WWII, parts of the castle were used by the military and large guns were installed in the park to fire on the nearby coast as defence against possible invasion.  The castle was once again in the defensive frontline as it was when it was originally built 900 years earlier.  The castle estate was Bernard’s home for his whole life and where he entertained family, friends, and royalty until his death in 1975.  He was succeeded by his cousin, Miles, Lord Beaumont, great grandson of the 13th Duke.

Duke Miles carried out substantial repairs to the castle in the 1970’s.  In 1987 Edward, Earl of Arundel and his wife moved into the castle and restored the interior of the castle.   Edward inherited the title in 2002 on the death of his father and became the 18th Duke of Norfolk.  He has continued to restore and improve the castle and the estate with ongoing projects such as the Collector Earls Garden and the new Ponds project.

Arundel Castle is a truly awe-inspiring place filled with history and magic just waiting to be enjoyed by visitors.

Earl Marshall of the United Kingdom.  The Dukes of Norfolk have been the hereditary Earl Marshals since 1672. The actual title has been recognised as an official office since 1386 and many holders were members of the Howard and Fitzalan families as Earl of Arundel or Duke of Norfolk.  The office involves the organisation of major state events such as Royal weddings, coronations, and funerals.