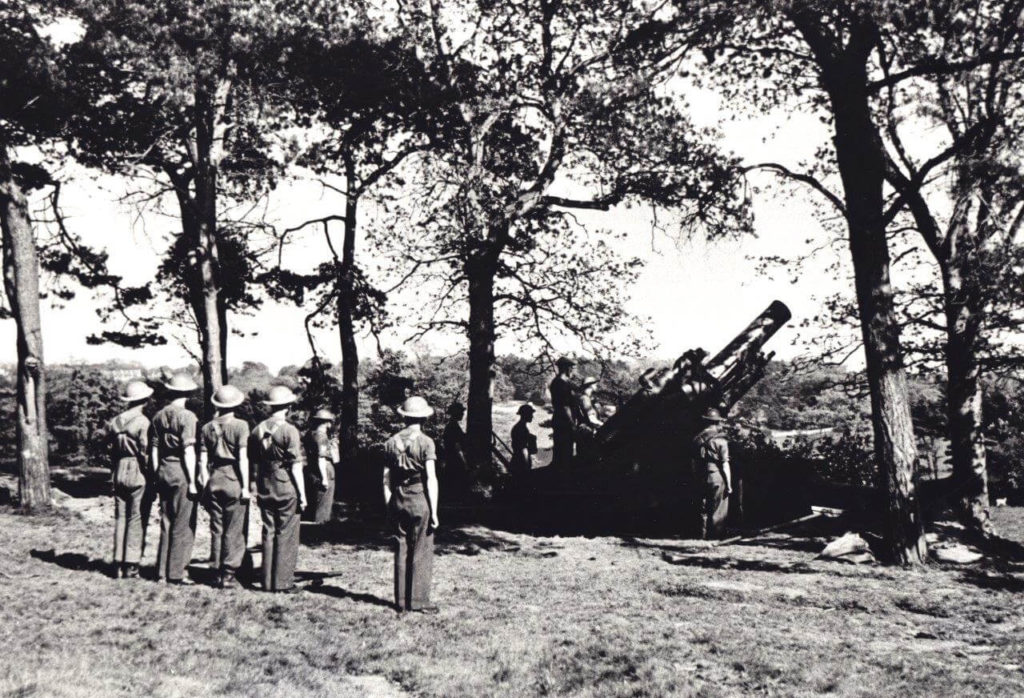 It’s hard to imagine that the small historic town of Arundel was a crucial defensive point during World War II, but that’s exactly what it was.

On July 16, 1940, Adolf Hitler issued Führer Directive No. 16, setting in motion preparations for a landing in Britain. He prefaced the order by stating: “As England, despite her hopeless military situation, still shows no signs of willingness to come to terms, I have decided to prepare, and if necessary to carry out, a landing operation against her.”

Britain was unaware of the order but following the evacuation of British and French troops from Dunkirk in May and June 1940, a full-scale German invasion was expected by Winston Churchill and his commanders. One of the likely invasion areas was identified as the beaches from Littlehampton along towards Bognor. Had the Germans landed east of the Arun, the nearest road bridge across the river, and the route to London was at Arundel, just four miles inland.

Therefore, Arundel was designated as a ‘Nodal Point’, the formal classification for a fortified town. Depending on the size of the town and its location, these were categorised as A, B or C Nodal points. Arundel was given a level ‘A’, because of its proximity to the potential landing beaches. A class A was expected to hold out for up to six days, while reinforcements made their way to the town.

After Dunkirk, troops were deployed to defend the coastal areas. Around July 1940, the west side of the River Arun was defended by the 114 Infantry Brigade and on the East the 115 Infantry Brigade. A brigade was usually made up of around 4,000-5,000 men but after Dunkirk, many were short on men and quality equipment.

In Arundel, many of the soldiers camped out in the Castle Park and Angmering Park although senior commanders lived in locations such as Arundel Castle and The Norfolk Arms Hotel. The main Triumvirate control centre was in the old jail under the Town Hall and consisted of the military representatives, senior police officers and senior borough council officials. If an invasion came, the Triumvirate would have been responsible not only for the defence of the town but also the administration of civilians (about 2,800 people), resources and services and water, food waste, firefighting, shelter and medical services during what may well have become a siege situation.

Arundel Nodal Point defences had an outer and inner perimeter along with a ‘Battle Headquarters’ in a basement under Arundel castle. During an invasion, anyone living outside the wider perimeter would be brought into the town and patients at the hospital would have been taken into the castle. Some of the properties on the outskirts of the defences were strengthened with timber beams and blast walls.

The known defences around the perimeter were Flame Fougasse, an improvised device made from a mixture of petrol, oil and tar poured into 45-gallon steel drums which used an explosive charge to project a burning sheet of flame onto an enemy. These were buried in the banks either side of the Causeway at the top of the hill heading into Arundel. It is also believed that similar were installed in the banks of the A27 just before the local hospital and at the side of London Road, south-west of the Castle Saw Mill.

The main road bridge through the town had 40 deep concrete sockets installed in which to insert vertical lengths of 5ft railway track – the site of one of these is still visible today in the pavement at the north end of the bridge. As well as this, large cone-shaped concrete blocks about 2ft high and 1ft wide were positioned at the side of the road along with the railway lines ready to be moved into position. The bridge was also defended by a field gun in a concrete emplacement on the bank next to the castle moat, just inside the lower castle entrance. As a last form of defence there were plans to plant explosive charges and destroy the whole structure.

Seven brick-built rifle posts were dug into the bank on the castle side of the moat. The last of these was still visible until the 1980s. An anti-tank rifle post was located behind a wall at the old Dairy near Swanbourne Lake to cover the Mill Stream. There were plans to demolish the parapet of the bridge to provide a clear line of fire. Several rifle posts were also positioned around the hillside surrounding Swanbourne Lake.

In February 1941, C Battery of the 56 Heavy Regiment Royal Artillery was stationed in the park to the north of the castle cricket ground, partially hidden under trees. They were equipped with two 9.5-inch howitzers that could fire a 280-pound shell over ten miles. (60 rounds were allocated per gun) These World War I vintage guns (upgraded to new 7.5-inch howitzers in July 1942 until the guns were removed for good in September 1942) weighed 18 tons and had such a heavy recoil they had to be anchored by a large metal box attached to the front of them filled with 11 tons of earth. They were trained on Littlehampton and Clymping beaches as well as the mouth of the Arun to fire on enemy shipping and invasion troops. The Battery had its Headquarters in nearby Tower House along Maltravers Street and the officers’ mess was at the Norfolk Arms Hotel in the town centre.

The flat ground near Hiorne Tower nearby was defended by more rifle posts as the area would have been an ideal landing place for parachutists and glider troops from which to attack the castle and town. Two pillboxes were also built, one close to the Castle Sawmill and the other slightly west of this.

Other defences around the town were a pillbox at the junction of London Road and Mount Pleasant, a defence post constructed from sandbags in the rear garden of 13 King Street, rifle slits cut through the wall surrounding the former Arundel C of E School in Surrey Street.
Arun Cottage along the Slipe, that was demolished when the current A27 Relief Road was built in 1973, had a large pillbox built next to it disguised as an outbuilding that contained a gun and rifle slits facing down river towards Littlehampton while Haggett’s warehouse next door housed an anti-tank rifle post.

Rifle and anti-tank rifle posts were also located in Lasseter’s jewellery shop in the High Street and the lavatory of Mrs Rich’s property to cover the bridge. Also, the top floor of what is now Sparks Yard in Tarrant Street and in two locations that I am unfamiliar with being the Borough Salvage Warehouse and a warehouse belonging to Mr Herrington.

At the end of the war all these defences were gradually removed, and the sites handed back for civilian use. The Nissen huts of the camps in Arundel Park were sold off and removed in 1947 with some being relocated within the town for business use. Compensation claims from authorities and private owners were handled in Arundel by the Duke of Norfolk’s Estate management.

Footnote
One can only be grateful that these defences were never required but one thing is certain, had the Nazi invasion of England taken place, both the military and civilians would have fought fiercely together for every single inch of land.

With kind thanks to John Wells.