The Maison Dieu or the Blackfriars? 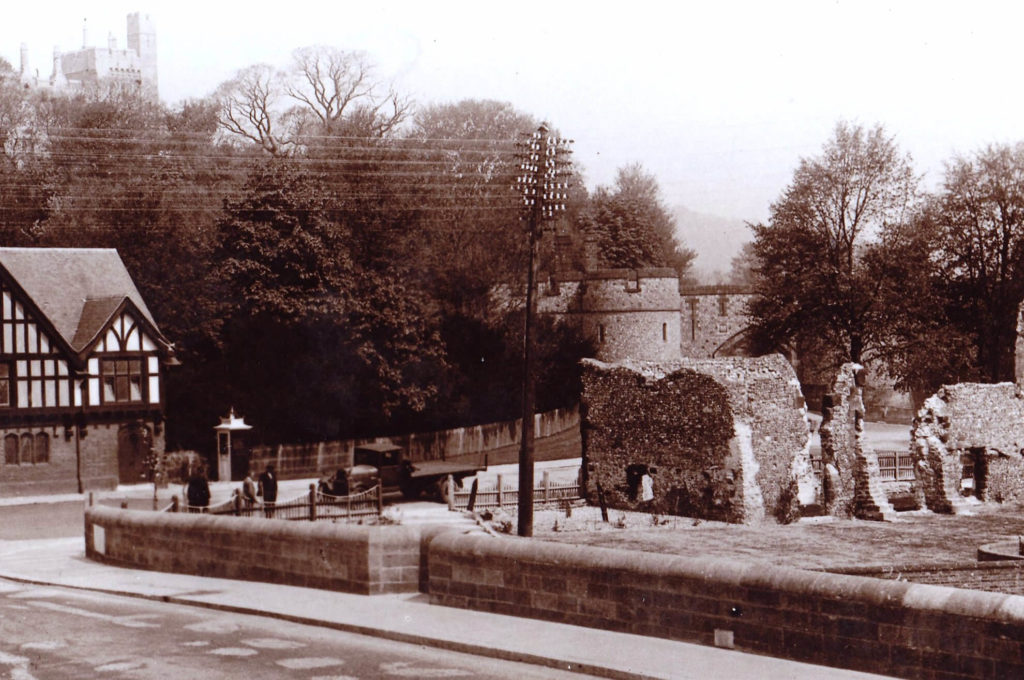 Over the centuries, especially during the Middle Ages, rich nobles attempted to buy themselves a place in heaven by building or financially supporting religious establishments. Often these financial arrangements included the priest or monks to pray for the soul of the sponsor and their relatives.

For many years, the 13thC Dominican Friary in Mill Road, Arundel, possibly founded by Isabel Countess of Arundel, was wrongly identified as the Maison Dieu, another religious establishment known to have existed in the town. An article including this major error featured in ‘The Gentleman’s Magazine’ of 1793 and was accepted as fact by nearly every writer since. The error was not noticed until around 1990 when Tim Hudson was researching the history of the town for the Victoria County History.

Had the writer in the ‘Gentleman’s Magazine’ carried out a little more research he may have seen one of the drawings produced by Samuel Hieronymous Grimm (what a wonderful name), who produced a number of illustrations of the castle and religious buildings in the town. The particular illustrations I refer to are of the ruins of the friary drawn in 1780 that he has captioned ‘The Chapel of the Friary at Arundel from the Bridge’ and the other, ‘SW view of the Friary near the bridge at Arundel’.

Other historical evidence for this being the Friary, if one requires more, include a document in the castle archives that refers to ‘a boathouse near the Cloister of the friars Preachers’, a report of an inquest in 1543 that refers to a body washed ashore at ‘fryers’ and an entry in the Borough account book referring to plans for a jetty at the north end of Arundel bridge ‘towards the fryers’. – As an Archaeologist, I found the last reference particularly interesting as during the archaeological excavation that was carried out on the site prior to the building of the museum; on the last day of the dig we uncovered a feature that we believe to have been the remains of a small jetty.

It was not uncommon for the Dominicans (who were also known as the ‘Blackfriars’ from the black over-garments they wore) to build on low lying or ‘poor’ land where they could be close to the people they would be preaching to. As one can see from the remains of this building next to the museum and extending across to the opposite side of the road, it was built very close to the centre of town next to the bridge. This would have made it very accessible for port vessels, the market as well as those travelling through town as the bridge over the Arun was the nearest one to the coast. The exact founding date is unknown, but it must have been before 1253, when it is referred to in the Will of St Richard of Chichester, and after 1221 when the Dominican order first arrived in England

It was built of sandstone and clunch (soft chalk) with a flint dressing but the sandstone has been robbed over the centuries – some used to build the first stone bridge in 1724 – exposing the clunch infill which has been severely damaged by the weather.

The Friary is the earliest monastic foundation within the town and is known to have been two storeys high with North, South and West ranges set around a large quadrangle. No evidence has ever been found of the East range where the chapter house would have generally been located. It would have been most unusual for the building to be built without an East wing as the Dominicans tended to use a tried and tested design which would have included this. It is possible that for some reason, maybe lack of funds, the East wing was completed in wood and has therefore left much less evidence of its existence.

The Friary church with a cloister walk appears to have been located in the North range, as is typical in Dominican Friaries, although only a few small portions of this range still exist just to the left of the Norfolk Centre.

The South range – which is the range near the river that often features as the foreground in photos of the castle – is believed to have been where the refectory (dining room) was located.

The West range is believed to have been the dormitory and when this was demolished in 1895 to build the post office, a number of skeletons and 14th C floor tiles were uncovered nearby. It is believed that this may have been the location of the Friary burial ground.

The Dominicans were a poor preaching order who seldom owned much property. At its height there were about 20 inmates, but during the period of the Dissolution, in the case of this establishment, 1538, only 5 friars remained. Following the Dissolution, attempts were made to sell the site without success. However, it was eventually let, together with the priory church, belfry, burial ground, all the buildings, ponds, gardens, orchards and two acres of meadow for 2 shillings (20p) a year.  Over the years the ruins have been used for general storage, a timber yard, a barn and small dwellings. From records and as illustrated in one of Hollar’s drawings from 1780, it is known that the West range was once used as a Malt House extended by the addition of a bay at the north end.

The remains of the building were split into two in 1894 when Mill Road was built through the middle of them to replace the centuries old Mill Lane which was then closed off. Further damage was done in 1965 when the side access drive to the post office was created which destroyed much of the remaining West Range with the north wall of the range collapsing in a storm later that year. Neither the public lavatories that were built in the North West corner of the courtyard or the Norfolk Centre in the same general area, took any account of the rarity or historical importance of the ruins.

Every year the remains, still often referred to incorrectly as the Maison Dieu by the towns older residents, sheds yet a little more of its outer skin to the elements.
The building is listed as an ancient monument by English Heritage and the north and west ranges are on the ‘at risk’ list. The larger south range is maintained by Arun District Council who have carried out considerable work over the years to stabilise the ever crumbling walls but this is an expensive and time consuming process.

Finally, I hear you ask ‘So where in fact was the real Maison Dieu – The ‘Hospital of the Holy Trinity’? Well, I can confirm that the location of this building has been discovered a mere ten minute stroll from the Friary but I’m afraid you will have to wait until my article next month to read about this.

With acknowledgement to various articles and notes by Tim Hudson and Rosemary Hagedorn.

The Maison Dieu – ‘Hospital of the Holy Trinity’

Located in what is now the Collector Earl’s Garden, West of the Parish church of St Nicholas, it is believed to have been founded by Richard Fitzalan, Earl of Arundel towards the end of the c14th and suppressed in 1546. It was run by an elected Prior as home for 20 poor men who wore brown habits and led a monastic-style life. The poor men had to be able to repeat the Lord’s Prayer, Salutation and Creed in Latin before being accepted. They had to rise at 5am in summer and 6am in winter and attend regular services. Duties included weeding the churchyard next door and tending to sick or frail companions.

Richard Fitzalan Senior was immensely wealthy – equivalent to a billionaire today – and well able to afford to build religious establishments such as the Maison Dieu. This was not only a sign of piety and a strong religious revival around this period but also a status symbol.