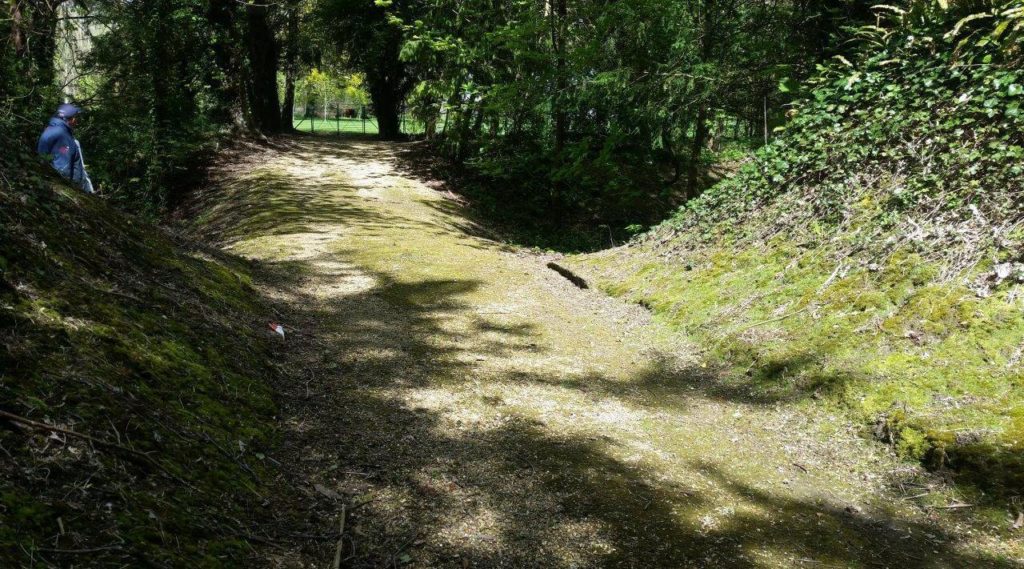 Sitting here on a grassy bank looking across at what must surely be one of the most beautiful cricket grounds in the world, it’s hard to imagine this was the location of a major settlement that eventually evolved into what we now know as Arundel.

In the surrounding woodland just out of public view are the large earthworks, comprising of a double bank and ditch, of a late Anglo-Saxon burh that is believed to have been built over or very near to the site of a much earlier Iron Age settlement. This can be corroborated by Saxo-Norman pottery found in the area of the impressive northern earthwork.

A burh is an old English fortification or fortified settlement like the network of burh’s Alfred the Great developed and built as defence against attackers.  The banks and ditch by the Cricket ground completely surrounded the piece of land marked on maps as the ‘Little Park’ until the whole area was landscaped and the pitch created in 1895.

The site at Arundel, still marked on maps as the ‘Little Park’, appears to have become more prominent than the nearby Saxon burgh at Burpham and evolved into a civil settlement before the Norman conquest of the country in 1066. The Domesday Book in 1086 showed Arundel as a flourishing market town although with a population of just a few hundred it would seem small to us today.

The town was defended on the south and east by marshy ground and the river and by 1295 a defensive ditch and wall had been built that ran from the castle to the Mary Gate then down the western limit of the town, the left side of Mount Pleasant, (to the rear of the current houses) and onto the Marsh/Water Gate, finally linking up with the river completing the defensive circle.

Murage (medieval toll for the building or repair of town walls) was granted for ten years, presumably to replace the palisade that fell down in 1275 as a record from that year mentions the making and raising of the palisade (an earth bank topped with wooden stakes) which had fallen down along an area between the Mary Gate and the Marsh/Water Gate that was located somewhere near the junctions of Park Place and School Lane. This new line of defences apparently excluded the Little Park and the old Saxon burgh.

There is another train of thought that this murage could have been part of a project to replace the timber defences with stone ones. If this was the case, the project was never finished and a short ten-year murage would have raised nowhere near the amount required for such a huge project.

In December 1643 Lord Hopton strengthened part of the earthworks of the old Saxon burgh and deepened its ditch following his capture of the town for Charles I. After Waller recaptured the town and castle in January 1644 the fortifications may again have been strengthened and the circular mounds at each end of the northern earthwork may be gun emplacements created to command the castle.

The northern earthwork and ditch is cut through by an early track descending the downs and during an excavation in 1988 the remains of a late 11th-century or early 12th-century chalk rubble and Caen stone gateway was excavated that could be succeeding an earlier one. The gate would appear to be the Red Gate mentioned in 1570, since the London road to the north was once called Red Lane.

While the park was heavily altered and landscaped at the end of the 1700s and in the 1800s, some of the old tracks and roads were rerouted and in a number of cases have been lost to historians.

My research indicates that prior to this work being carried out it is likely that the road leaving the town through the Mary Gate turned right about halfway along the current lane and cut through the centre of the Saxon burgh (now the cricket ground) and linked up with the Red Gate leading to Red Lane, later the old London Road through the park. A postern gate near the Mary Gate is indicated by the road name Postern Lane near Hermitage Lane (recorded 1615 and later). Is this postern gate the same as the Red Gate?

In the mid and later 1800s the Little Park was a private pleasure garden for the Duke who used to enjoy promenading around the area with his wife and guests after lunch or dinner. The area was sometimes opened to the general public until it was levelled and landscaped in 1895 to create the spectacular castle cricket ground. The earthen banks and ditches that protected the Saxon settlement still partially surround the cricket ground that was built within them; particularly to the north and north-west.

Records would indicate the defensive town wall appears to have been demolished by 1659 although its route that followed the natural chalk escarpment can still be seen behind houses in Park Place and the lower part of Mount Pleasant.

The castle cricket ground is still in regular use and many professional players regard it as the most picturesque they have ever played on. More information on Arundel Castle Cricket Club can be found at http://www.cricketatarundelcastle.co.uk/

* The Mary Gate (sometimes called St. Mary’s Gate), not to be confused with the nearby Inn that was named after it, is the ancient gateway through the town walls to and from London. With its knapped flint and Pulborough stone dressings it was built on the site of an Iron Age defensive ditch and many years ago the chapel of St Mary Over the Gate was located on the upper floor. Partially demolished in the Civil War, it was rebuilt in the late 18th-early 19th century.

The ceiling of the upstairs room has four massive oak timbers with 16th-century-style heraldic decoration which partly relates to the FitzAlan family who held the earldom of Arundel during the period 1267-1580. Too large and too weathered to have been part of an interior decoration it is believed they may be timbers from a drawbridge.

The room above the Mary Gate arch was used in the 1980s by the Arundel Festival committee but is now just used as canteen for the castle gardeners.

With thanks to Tim Hudson and his book ‘Arundel’ – From the Victoria County History Series.