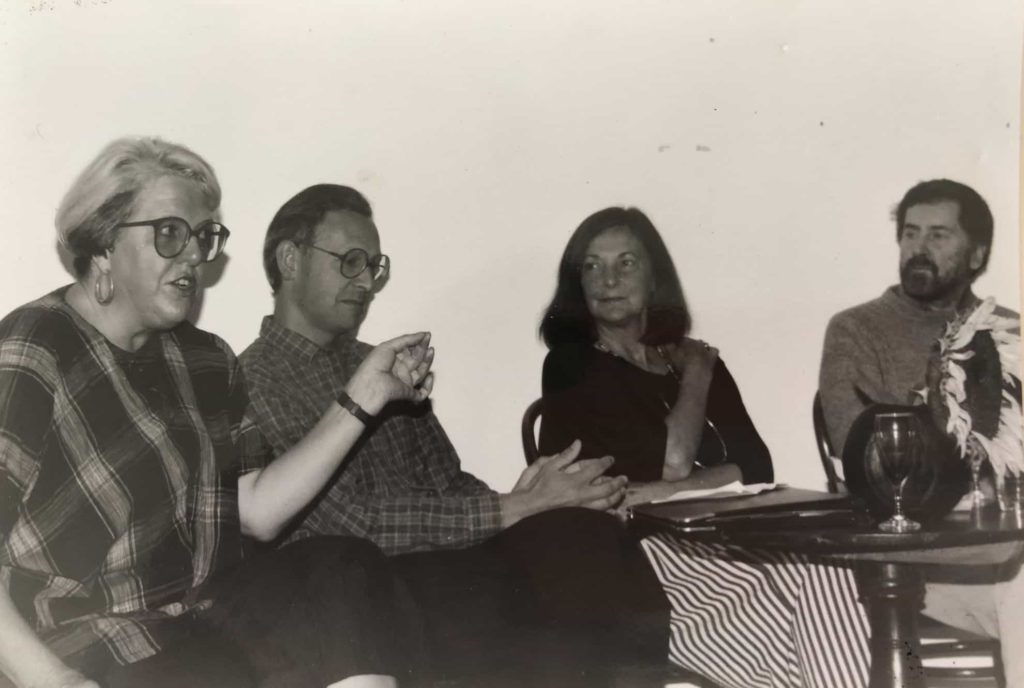 “Home is where the Art is”

The Arundel Gallery Trail started in 1989, ten years after the first Arundel Festival, which had no visual arts element. Ann Sutton, MBE had the original idea and within hours had the support of Oliver Hawkins, Renee Bodimeade and Derek Davis. These four founders were local, but established, artists or art teachers.

They achieved their aim to create a circular walking trail within the town centre, on which visitors could see “50 temporary galleries in cellars, conservatories, front rooms and back yards of houses, shops and offices”. The original route took in Tarrant Street, Maltravers Street and the High Street. Being so compact, without the need for a car to see every venue, it was the first of its’ type in the world, a format that is now copied in towns and villages throughout Sussex and beyond.

It is a testament to the founders that in that first year they included 50 galleries in the Trail Guide. The format was the same then as it is now: “Several studios of resident artists will be open, plus the commercial galleries. Exhibitions are one-person shows of painting, sculpture, photography and the crafts: Some of the artists are well known locally, while others have international reputations. All live and/or work in Arundel”.

Artists who took part in 1989 will be familiar to regularly Trail goers and followers of the Sussex “Art Scene”: Derek Davis; Neil Holland; David Peduzzi; Ann Sutton; Oliver Hawkins; Matt, Nick and Miles Bodimeade; Andy Waite; Bill Philip; Val Lishman; Josse Davis; Ruth Davis and Jaques Ruiterman. Incredibly many of them have been regular exhibitors over the years, and some will exhibit in this special anniversary year.

Other artists joining in the early years, also became mainstays. These include:

•   Geoff and Amanda Metcalfe, whose group shows were legendary and at whose house on King Street many Trail meetings took place.

•   Johnny Woodford, whose sculpture installation ‘The Bends’ will be on show in 2018.

•   Giles Penny, then a resident, and whose sculpture “Waving Man” will be on the Causeway roundabout this year.

•   Veronique Maria with her relief paintings.

•   Eric Mellon, whose paintings and ceramics portrayed Greek myths and the circus.

•   Emily Ball, with her abstract paintings and who now teaches art in East Sussex.

•   Victor Stuart Graham, whose found wood painted houses and boats are now seen across the South of England.

•   Nick Plumley, whose watercolours of local church paintings were reminiscent of John Piper.

•   Piers Ottey now established at the Mill Studio, Ford where he paints and teaches.

•   Christian Doyle with her regular documentary photographic exhibitions, most memorably ‘Traders’ in 2000 showing portraits of 250 local people at their work.

•   Chris Milton with his finely carved marble now has an established reputation in his own right.

•   Robert Oliver Jones whose figurative paintings have generated a strong following for his work.

It is this variety within the Trail which visitors enjoy; they are able to see new work by regularly showing artists and follow their development, and at the same time see the work of other artists who may only show for one or two years. In 1995 founder and organiser Oliver Hawkins said “It is certainly not the same old team – many favourite artists are still here but there is a large body of works by artists whose work will be entirely new to regular visitors, and that has to be a good thing”.

In 1996, the organiser, then Fiona Milligan, said “We can promise them an exciting show, an eclectic collection of of art in a variety of interesting venues”.

Over the years the Trail expanded to include the whole Town and even some venues further afield, but still maintained the original ethos of being totally walkable (almost).

The Trail has helped to establish the reputation of artists and does so much to introduce visual arts to an extended public. Many gallery owners and curators from London and the South East come to the Trail in search of new artists. Thus Arundel was established as a centre for visual arts, and now has five commercial galleries operating in a Town with a population of under 4,000!

Some years the Trail attracted well established artists, such as

•   Philip Jackson and HRH Prince of Wales (signed lithographs drawing “crowds to the River Gallery” to benefit the Prince’s Trust) in 1995;

•   In 2004 “Queen of the Night” a large sculpture by Michael Sandle was placed on the roundabout courtesy of the Cass Sculpture Foundation at Goodwood.

•   Howard Hodgkin, Peter Blake and Patrick Caulfield were shown at the Zimmer Stewart Gallery in 2005, then both Terry Frost, RA and Anthony Frost have had works exhibited at the same venue several times since.

•   Philip Jackson then showed several of his large sculptures in the Castle in 2008.

In the first year, 1989, there was eight pieces of sculpture, all by Andy Frost, installed at Arundel station along platform 2. Ann Sutton and Derek Davis would go down to the station each night until the last train had left for Portsmouth to ensure the safety of the works. Only one item went missing, this was a 3 inch figure of Fay Wray held by a large 3 metre tall King Kong figure made from tin. Trains arranging from London would tilt to once side as passengers strained to see the sculptures.

1996 saw sculpture on the Causeway roundabout for the first time, and this was a large 12 ft high “Flatman” sculpture by Giles Penny. Large pieces were placed there by Giles Penny for a number of years, including Miss A27 in 2000, a tall pole on the top of which a flying woman seemed to float above the busy A road. In 2007 there were eleven outside sculpture venues which included Wooden Horse by Oliver Hawkins on the roundabout and Giles Penny showing with Julian Broad inside the Castle grounds. In 2007 Victoria Brown covered trees on the Ford Road A27 roundabout in bright coloured felt under the title “Wrapped Trees”. In recent years the Trail organisers Mark and Rebecca Ford have created several memorable large woven sculptures, some hanging from the Castle walls or floating on the River Arun!

Some times the public sculpture might possibly go unnoticed, as in 2007 when Linda Bernard placed a number of painted “Blue Stones” in various sizes around the town.

Once or twice, Trail installations and sculpture outside have courted controversy: In 1999 award winning land artist Moss Fuller wrapped Arundel’s famous trees lining Mill Road. She said “I change the landscape briefly, returning it to its original state, leaving an image or experience in the mind”. However, not all were impressed and one resident wanted to start a petition to have it removed. In 2008 Stuart Slade installed his “Curious Scuttle Head” on the A27 roundabout; these were large spiders with human heads they caused such a stir that one driver complained that they gave their children nightmares!

Vital elements each year are the non-artist venue owners such as Sue Marsh on Maltravers Street, who summed it up perfectly in the press in 1993 saying “I suppose some people come in because they are nosey, they want to see what the house is like on the inside, and perhaps I should be a little nervous about security” She continued: “But most come because they are interested, and we provide the space because we believe in the spirituality of art and want to support young artists”.

Sadly, as property prices rise, there are fewer artist’s studios now than in 1989 so artists have to find house holders, shop keepers, publicans who are willing to let them exhibit for the ten days of the Festival and Gallery Trail.

Keeping it in the Family

Artists, like many professionals, tend to marry artists, and their children often also become artists. So it is not surprising that over the thirty years of the Trail we see new generations taking part.

Matt, Nick and Miles Bodimeade, sons of Renee and artist and film story board creator, John Bodimeade all became professional artists. They showed as recent graduates in 1989, and return in 2018 to exhibit together again as established artists. Derek Davis, his wife Ruth and son Josse have all been regular exhibitors; Oliver Hawkins and his daughter Tabitha have both exhibited together and helped with organising, with Tabitha having designed posters for the Trail; Susie Jenkins introduced her son Danny Jenkins and his wife Beatriz Huezo-Diaz to the Trail in 2000, now they are both architects based in Brighton.

Tabitha Hawkins said in 1995 “it is so nice to be able to talk to visitors about your work, and get feedback even if some of it is negative. I am sure some people enjoy the Trail s much because it is informal and they feel more comfortable in home surroundings” she went on “It is a bit like a treasure hunt for them as they follow the Trail, and they get a lot of fun out of that”.

The Trail is largely self-funded from artist subscriptions, but in some years it has received financial help from Northbrook College and South East Arts (now the Arts Council). This enables the whole event to be free of charge and provides the Trail map. Most of the work on show is for sale.

Many charities have benefited over the years with proceeds from sales going to various causes which the artists’ wanted to support. These include art in hospitals, breast cancer, schools in El Salvador.

To commemorate the thirtieth anniversary of the Trail, Arundel based film maker Jane Mote of Beech to Beach, has created a short film which includes interviews with Ann Sutton, Oliver Hawkins and many others involved with Trail. This can be seen on the Gallery Trail website (www.arundelgallerytrail.co.uk) and will be shown during the 2018 Festival.

The 2018 Arundel Gallery Trail is set to be a bumper year with a larger than normal guide, many names from years past taking part as well as new ones. It is no wonder that Arundel is now seen as the “Home of Art” in Sussex and the South East or the “St Ives of the South”.