Can you help us solve the Nineveh House mystery? 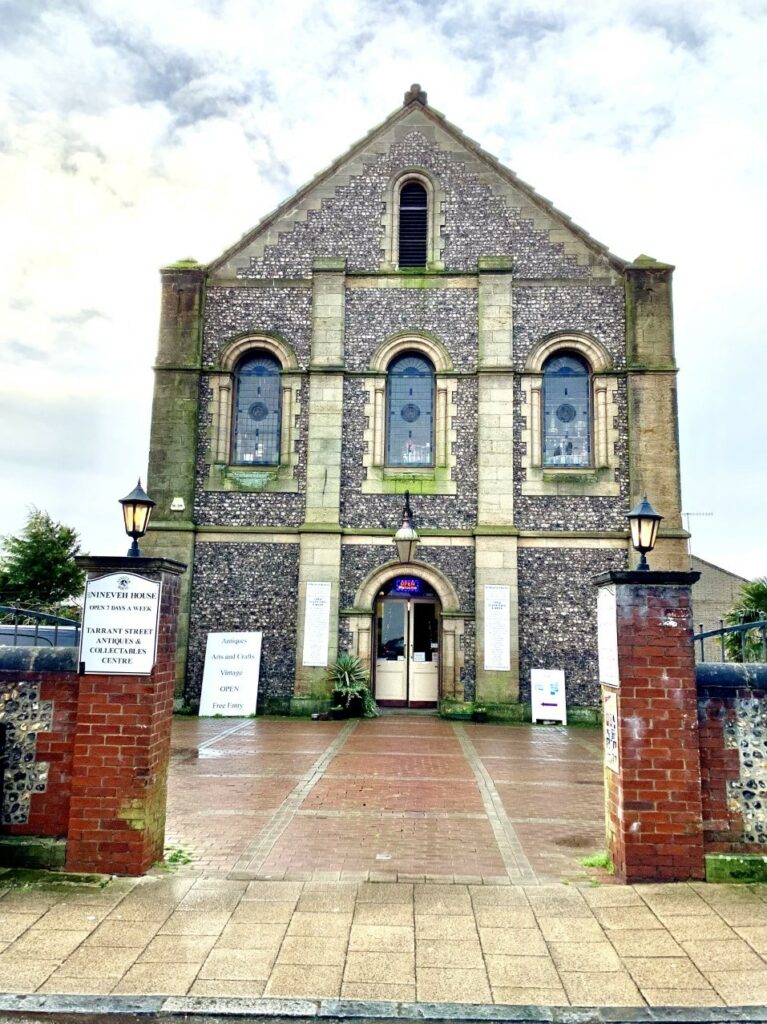 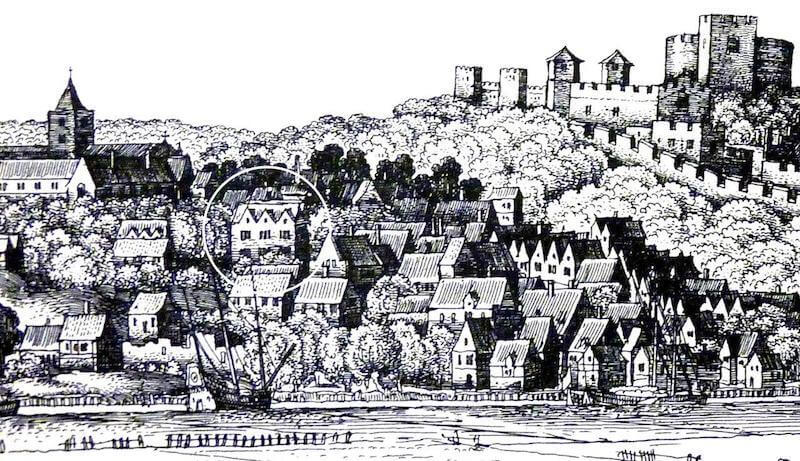 A 1644 engraving of Arundel town and castle shows what is thought to be Ninevah House (circled).

What do you know about Nineveh House on Arundel’s Tarrant Street?

It’s hard to miss the majestic old chapel as you stroll down Tarrant Street. Nineveh House, now home to a crafts and antiques centre where visitors to Arundel and residents alike can enjoy quirky, independent shops, traditional artisan crafts and original art.

But what do you know about the building?

Let’s start with the name. Nineveh (pronounced Nin-e-ver) is one of the oldest cities in Antiquity, situated on the Tigres River in what is now known as Iraq. So, what has that location got to do with Arundel?  Apart from the fact that Arundel has its own historic river, the River Arun, there seems to be no known connection. Do you know of one?

What we do know is that a magnificent mansion called Nineveh House once stood on this site. According to local lore, the house was built in around 1420 by the 13th Earl of Arundel, John Fitzalan. The house was constructed with locally sourced materials, chalk faced with flint, which are both readily found on the South Downs nearby.

The mansion’s grounds went right down to the River Arun. It had a grand staircase made from oak that was beautifully carved with scrolls, flowers, and oak sprigs. Sadly, when the property was demolished, no one wanted to buy this ornate staircase. But some sections of a large and elaborately carved mantelpiece were made into a cabinet for the Rev. Edward Turner. We would love to know where it is now. Have you ever seen the cabinet (shown below)? 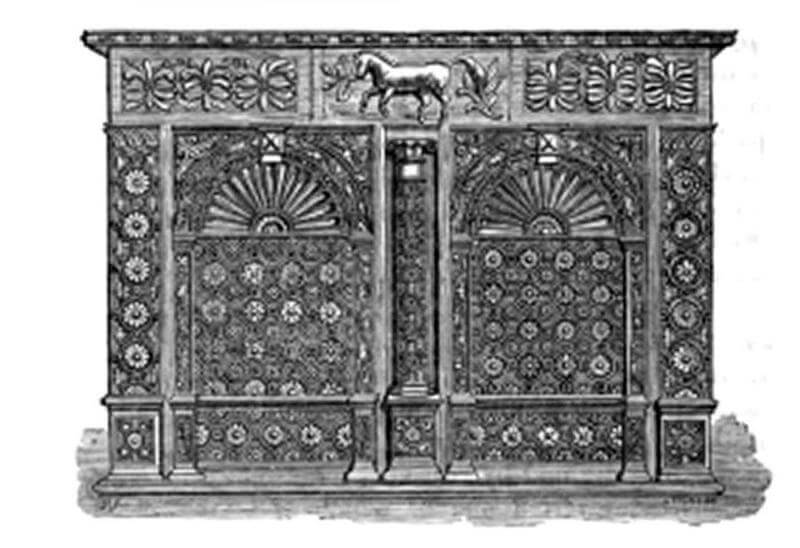 The cabinet made up by the Rev. Edward Turner from the carved mantle surround from the former Nineveh House.

Why was the mansion Nineveh House demolished?

Rev. Turner wrote about Nineveh House in later years when it was in a very poor state. Sections were rented as flats, stores, workshops. It had also been a drinking establishment called the Star Inn. Rev. Turner described decorative sculptures throughout the house, which are visual links to Arundel. One example was a horse with an oak branch in its mouth, a well-known symbol of the Earls of Arundel. Rev. Turner concluded that having found initials carved into one of these reliefs, it had indeed been built by John Fitzalan which confirms the story you still hear locally today.

Does anything remain of the original Nineveh House?

Next time you pass the building, take a moment to look at the two sandstone pillars either side of the entrance to Nineveh House. These are probably the only known remains of the original mansion and may have been part of the entrance to the grounds. 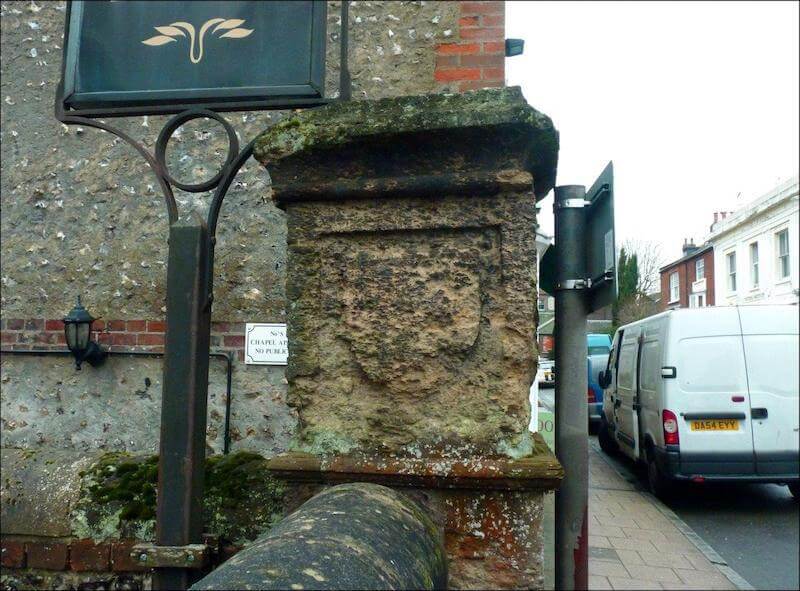 What’s the story behind the Nineveh House we know today?

After the mansion was demolished, a group of independent Christians began meeting in Arundel and in 1784 they built their own chapel in Tarrant Street.

Many of us have probably visited the site of their first chapel – without even realising! It stood where the independent grocers Larkins is today. You can see a blue plaque to commemorate the chapel above the shop front.  One of the ministers was a well-known celebrity at the time. George MacDonald, famous for his preaching, and moral and mystical writing, was eventually obliged to leave Arundel because of his unconventional views!

The congregation thrived and in 1836 the group bought a site next to the chapel, the former Nineveh House mansion, where, in 1838, they built a new place of worship – the Nineveh House you can see today. 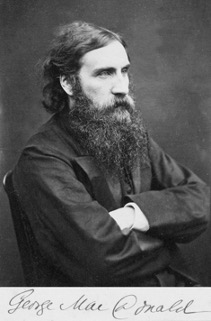 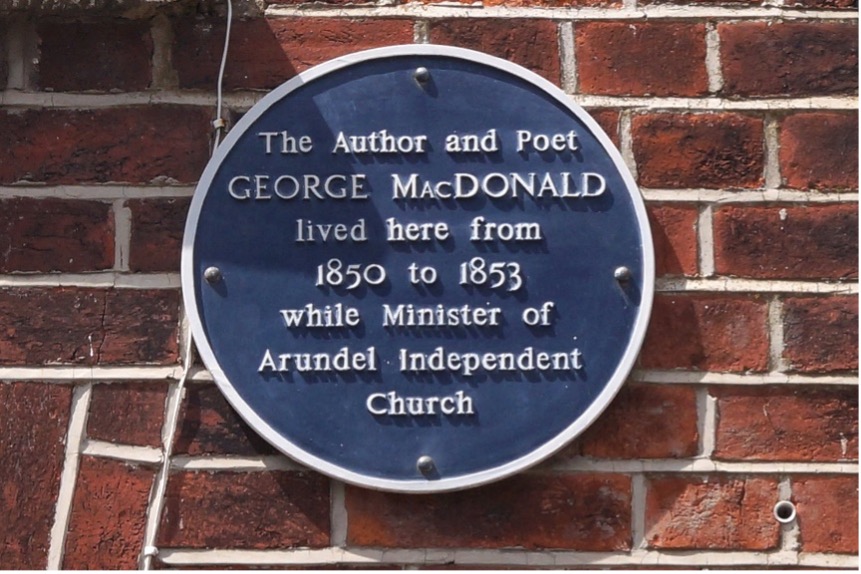 Nineveh House and Arundel Town Hall – can you spot the similarities?

The new ‘Nineveh House’ was commissioned by the London-based architect Robert Abraham. At the same time, he worked on Arundel Town Hall. If you look at both buildings, you can see the similarities between them.

The chapel eventually became known as the Arundel Independent Church or Union Chapel. In 1974 this beautiful, majestic, and unusual property was designated as Grade 2 listed. And, until the early 1980s, services were still held there. You could even get married in the building right up to 1982, when the certification was formally revoked. Were you married there? Do you know anyone who was?

Then the building was converted to commercial use and once again named Nineveh House. And its next chapter began…

What would Health and Safety make of this nowadays? 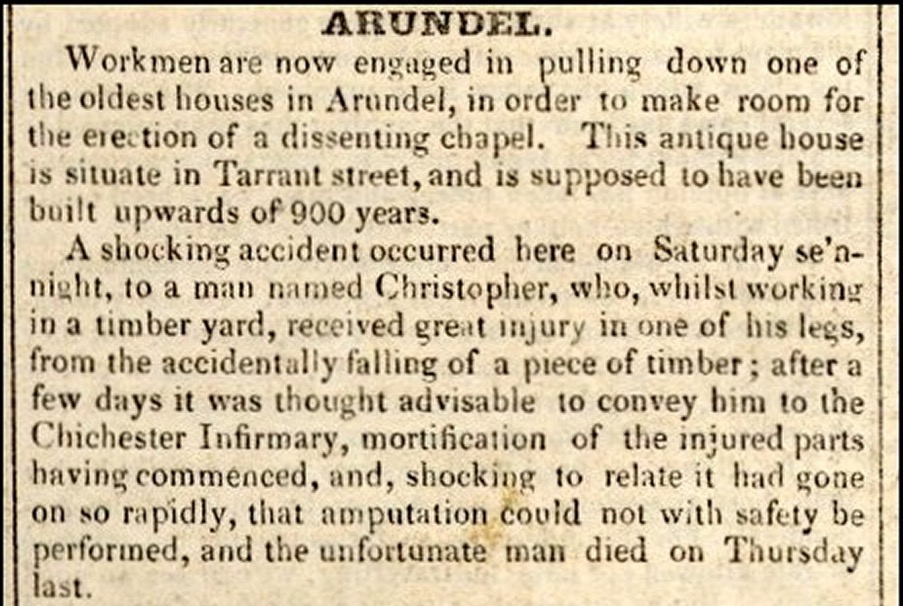 Can you help us solve the mystery of the Nineveh House name? It’s a long way from Iraq to Arundel’s Tarrant Street. What was the connection? If you know, please get in touch. We’d love to know too!

Keep up to date with Arundel, sign up to our newsletter...