The Port of Arundel 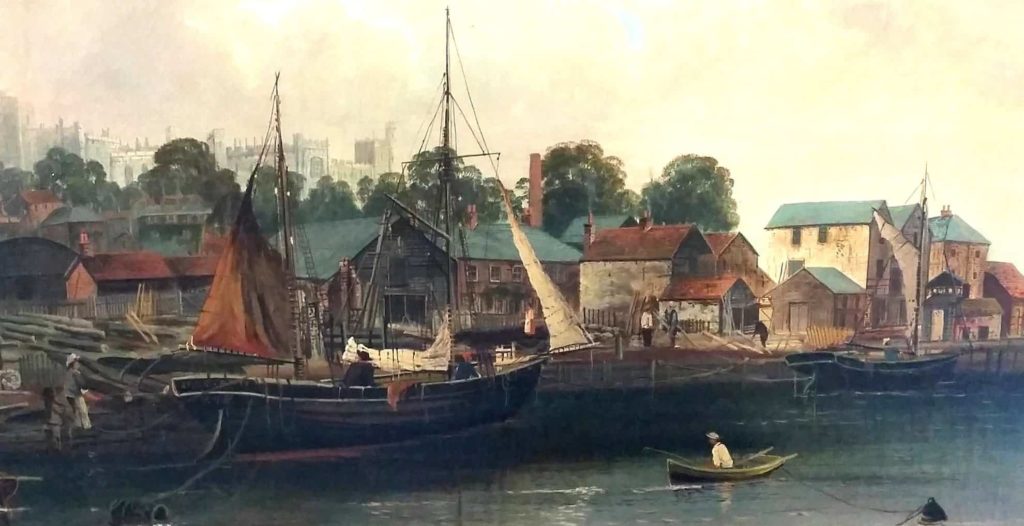 It is believed that there was a small port in Arundel before the Norman conquest of 1066 and that Roger de Montgomery (the founder of Arundel Castle in 1067) received income from this port. It is documented that William II landed at Arundel in 1087 after the death of his father.

It should be noted that some historians believe that the original Port of Arundel may have been situated at Ford some two miles downstream as the tide did not reach as far as Arundel until a few centuries later.

In the c13th the port was used by both cross channel and coastal trading vessels which would have docked at what today is known as the Town Quay, formally known as Mayor’s quay. The first documented reference to this name is from the 15thc. For much of its life the port also ran a cross channel passenger service, often including catholic priests and soldiers.

By the 16thc. the quays had stretched part way down what is known today as River Road, and by the 19th c they extended down to the end of Surrey wharf and Tarrant Street adjacent to the relief road bridge. According to local tradition, the Duke’s Quay was located here and much of the Caen stone used in the rebuilding of the castle was brought ashore here at the end of the 19th and early 20thc. Most of the 10 ships registered in Arundel in the c16th were of no more than 30 tons although larger vessels could reach Arundel by using the spring tides. ‘Spring’ Tide is an historic name and this natural phenomenon occurs twice each lunar month when the tide can be two metres or so higher than normal.

By the end of the 17thc. the Town Quay could accommodate vessels of up to 300 tons displacement with a draft of 20 feet. Trade in the port was supported by the Nineveh Ship Yard which built ships up to a similar size to the one above, as well as building smaller vessels such as Hoys (small coastal vessels) and sailing barges. Most timber would have arrived at the ship yard by the river as there was no adequate road serving the yard.

As its name implies this shipyard was named after the high status 15th c Nineveh House that used to be in Tarrant St. whose entrance and grounds once reached all the way down to the river. The 19thc. Nineveh Chapel built on the site of the demolished house can still be seen from River Road and overlooked the ship yard. The yard continued in business up until the mid 19thc. But as the use of Arundel Port became restricted by bridges built downstream, so the size of ships reaching it would lessen and the yard concentrated on smaller vessels. One of the larger ships built here was the Michelgrove which was of 300 tons. A fine model of this ship can be seen on display in the town museum.

Goods transported in and out of the port varied greatly and in 1497 included exports such as, Timber, grain, cattle, horses, cloth, tanned calf skins and tallow while imports included Salt, apples, hops, fish, nuts, wine, oil and soap, tar, glass, canvas, paper, brass, paving tiles, and painted cloth. Among the more unusual exports were in 1678 when 60 swans were sent to France by Lord Montague as a present.

During the period when parts of France were “owned “by Britain, the port of Calais was in 1552 supplied with food and other stores by ships from England, some of which departed from Arundel port.

In the 17thc. imports included, grocery wares, white salt and bay salt, hops, fish, coal, iron, soap, lead, stone pots, sails and anchors and luxury goods such as, tobacco pipes, cut glass, French wine as well as muskets. In the 1730s goods from Arundel were also being transported to Ireland Spain and Portugal.

The river mouth at Littlehampton was often a source of trouble as it constantly silted up reducing the size of ships that could enter. In 1793 major improvements and the construction of a tow path to Arundel briefly improved the Port of Arundel’s trade, heralding the port’s greatest period till about 1830.

The upstream limit of the port has always been determined by the town bridge, first recorded in the 12th c. although it is recorded that in 1680, a jetty and quay were built upstream of the bridge. Before that, the limit may have been the lack of water depth beyond this point.

It will be noted that the port development so far has all been on the north bank of the Arun. As the town grew so did the industry and in the late 18thc. four docks were cut into the south bank just below the bridge, one of which served the Swallow Brewery, and another was a bonding dock for the use of the Custom house. By 1875 two of these had silted up due to disuse, as did the third one by c1896. The brigantine Ebenezer was a regular visitor to Arundel delivering coal both to the gas works just below the relief road as well as to the Swallow Brewery. This ship was built in Shoreham and owned by Robinson’s of Littlehampton and a model of it can be seen in the town museum. She was one of several ships that carried out the Newcastle and Welsh coal runs.

It should be remembered that there was also traffic from upstream. This was mainly carried out by barges which would have been poled (running with the tide) or sailed. These barges could have come from as far as London (near London Bridge) via the Thames and the river Wey, then the Wey and Arun Junction Navigation into the Arun. They could be loaded or unloaded at Arundel or pass through to Littlehampton or via the Portsmouth and Arundel Canal (at Ford) on to Chichester or Portsmouth.

Between 1815 and 1832 there was a company called the Arundel Barge and Lighter Company who owned 10 barges which serviced these routes along with other companies. Goods entering Arundel from the south with destinations upstream of the town would tranship into a barge and travel onwards as these vessels could pass under the low bridges.

During the late c19th, due to the difficulty of navigating ever larger ships up the winding river Arun, Littlehampton began to take some of the trade as it developed its own harbour at the mouth of the river. During this transitional period, the well-known steam paddle tug Jumna (another model that can be viewed in Arundel museum) was regularly seen towing ships up and down the lower reaches of the river. The Custom House (in Maltravers Street) remained at Arundel until 1850 when it moved to Littlehampton. This was a further nail in the coffin for Arundel’s port trade.

Other impediments were the building of the swing bridge at Littlehampton in 1908 which caused delays for shipping while waiting for it to open. Then the building of the first railway bridge across the river at Ford in 1847 which had a rolling centre section which moved aside to allow shipping to pass, yet another delay. By 1910 it was said the river trade, other than the occasional coal transporter, was virtually extinct. The last large sailing ship called in 1917. In 1938 the railway was electrified, and it was no longer possible to open the centre section of the bridge, but by then large shipping to Arundel had ceased altogether.

Today the Town Quay is used by the occasional tourist boat or small private boats, its busiest moments being during the annual Dragon Boat races run by the Arundel Festival.