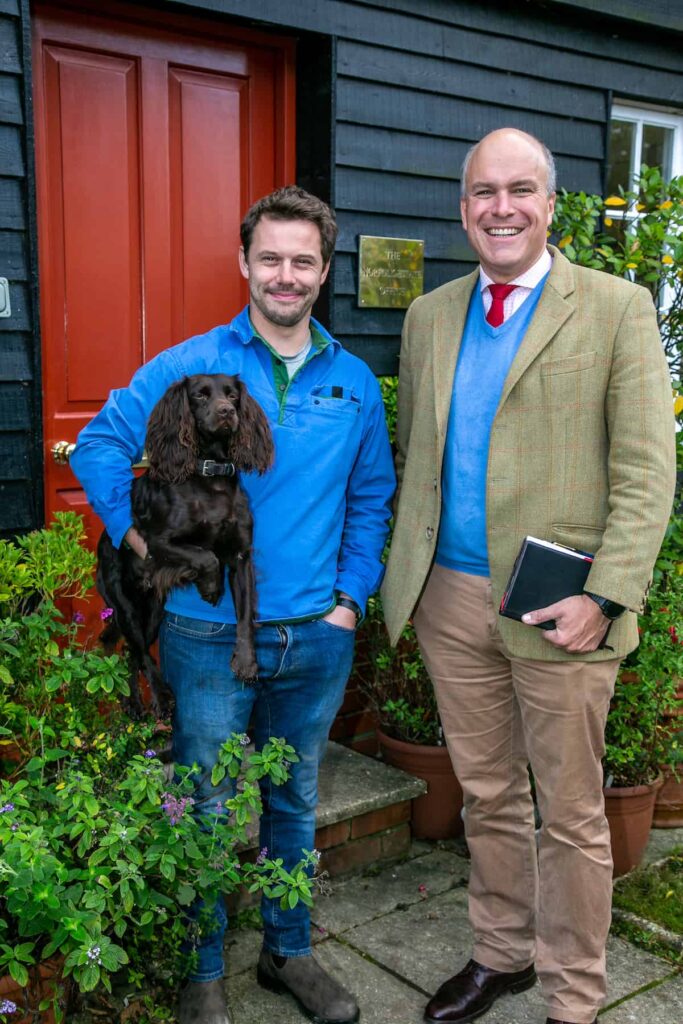 ‘AN interesting world to navigate’ is how Alastair Deighton, the recently installed Norfolk Estate Manager, describes the challenges facing the Estate. The turn of phrase is appropriate from a one-time officer in the Royal Navy, and there is no denying that for a large and diverse rural estate the world is changing as dramatically today as perhaps at any time since the first Earls of Arundel established themselves in the Castle following William the Conqueror’s victory over the Saxons almost one thousand years ago.

Following the retirement of Peter Knight, who had held the reins as Estate Manager for thirty six years, Alastair was brought in from Savills, with Conor Haydon appointed as Farms Manager. Both are based at the Norfolk Estate Office by the Park, both have complex maps on the walls behind them giving an indication of the wide range of locations and activities to be overseen. As one hears them outline the opportunities, threats and uncertainties surrounding estate management in a post-Brexit, climate-changing world one can imagine those maps as military campaign charts, setting out territory to be defended, lines to be reinforced, and ground to be gained.

For Conor farming has been a way of life from the start, growing up with first his grandfather Reg, and then his father Ryan running the farm at South Stoke on the Norfolk Estate. After A-levels Conor went to work for a season on a farm in Western Australia – less of a gap-year spree he says, more of a ‘three months glued to the seat of a combine harvester’ experience. Back in England he enrolled at Harper Adams University in Shropshire to complete a four-year BSc in Agriculture. The course included a fifteen-month secondment to a contract farm in Herefordshire, where among other skills Conor was able to develop considerable management expertise working with that backbone of British agribusiness: three hundred Eastern European pickers.

Having concluded his studies Conor was able to return to South Stoke, at an opportune moment when a shortage of labour meant he was particularly welcome to work on the farm while looking for job opportunities. He came within a whisker of a position at Sandringham but was then happy to find a post much nearer home, as Assistant Farm Manager at the 12,000 acre Goodwood Estate. Promotion to Farm Manager followed – ‘terrifying!’- but Conor clearly managed it with aplomb, so it was with an ideal track-record that he applied for the new position with the Norfolk Estate. He had known Peter Knight as a family friend and had a good understanding of the Estate beyond the confines of South Stoke Farm. Now fully ensconced in the job he is full of appreciation for the structure Peter put in place, in terms of a small permanent staff working closely with a large number of specialist contractors.

Whereas at Goodwood the priority had been organic farming, at the Norfolk Estate the defining mission is bio-diversity. Readers of The Bell will remember coverage over many years of the successful initiative to encourage the grey partridge population, and the focus remains on red-list bird survival. The Duke’s principle – ‘twenty percent at the edges for nature; eighty percent in the middle to feed the world’ – informs the policy of wide hedgerows, encouraging the maximum insect, bird and mammal life. As the Common Agricultural Policy subsidies that have supported European farming for the past forty years disappear, funding streams such as the Environment Land Management Scheme, including the Sustainable Farming Incentive, Local Nature Recovery and Landscape Recovery schemes, are set to provide a more focused programme of subsidy. With its proven record in the field the Norfolk Estate is surely well placed to make the best possible use of such funding.

With his overview of the whole Norfolk Estate, Alastair is responsible for a portfolio of commercial activities that extends well beyond agriculture. His early years, like Conor’s, provided the spur to his current career. Brought up in Dorset and Cornwall, where his father was a tenant farmer, his first choice was to join the Navy. He was selected by the Admiralty Board for a sponsored place at Exeter University, to read Economics and Politics, followed by officer training at Dartmouth. But after five years of service he made the decision to move into a career that would allow him more time with his family. As a boy he had enjoyed all aspects of the farm. As well as loving the tractors, he reckons that at the age of six he knew more about varieties of wheat than most adults but looking back he remembered in particular a man who visited the farm from time to time, and whose job had always seemed rather intriguing. ‘That was Mr Thwaites, the Land Agent’, said his father. Mr Thwaites was duly contacted and, following his advice, Alastair enrolled at the Royal Agricultural College, Cirencester, to pursue a master’s degree in Rural Estate Management. This in turn led to a position with Savills, one of the world’s leading property agents, and spells in Scotland and in East Sussex, before coming with his wife and two daughters to live and work in Arundel.

It may seem far-fetched to compare today’s crises with the Black Death or the Civil War but speaking with Alastair it becomes clear that the impact of climate change, and the strategies necessary to combat global warming, are of critical significance.

It may seem far-fetched to compare today’s crises with the Black Death or the Civil War but speaking with Alastair it becomes clear that the impact of climate change, and the strategies necessary to combat global warming, are of critical significance. In terms of ‘carbon sequestration’ – the process by which plants, particularly trees, capture carbon dioxide and transfer a proportion to the earth – the Estate has served the planet well, with the massive tree planting programme following the Great Storm, and more recently the planting of ten miles of hedgerows. Alastair is full of praise for the Estate’s small forestry team, responsible for around 1500 acres of woodland. The many Arundel residents who made such good use of the Park during the days of lockdown will have been impressed with the enormous stacks of cut timber lining the road, knowing that as mature trees were being felled, new ones were being planted, and the regeneration of the woodland was being assured.

A major part of the Estate’s business is in letting residential properties, and here the increasingly demanding standards for energy efficiency are challenging. When in the nineteenth century Duke Henry was building over a hundred houses for his Estate workers, the basic requirements were to provide a fireplace and keep out the rain. Duke Henry built to the highest standards of the time but would have been baffled by the concept of EPC (Energy Performance Certificate) ratings. The amount of work necessary to achieve EPC ‘C’ ratings, mandatory for all let properties by 2028, will be formidable. Additionally Alastair has to deal with plans for new build, always guaranteed to generate debate, and the re-purposing of buildings such as the old Dunlop stables. His experience with Savills will doubtless stand him in good stead, but even more so his evident personal enthusiasm for Duke Edward’s vision for the Estate.

Another area for attention is the river, where a combination of climate change and a recent shift of responsibilities has raised concerns about the threat of flooding. The Environment Agency, set up in 1995 under the auspices of DEFRA, has until recently dealt with flood defences, but while its initial brief gave it the statutory right for this undertaking, it gave it no statutory obligation. The Environment Agency has has now decided to pass the responsibility for flood defences on to the respective landowners through whose properties the streams and rivers run. With more extreme weather conditions exacerbating the situation, flooding is a concern both for residences and farmland, and the maps on the Estate Office walls take on a more critical dimension.

How long the maps will stay in place is open to question, as a process of sophisticated digitisation is under way, and traditional maps will become less and less necessary as practical tools. I hope they remain, as it seems to me they provide a perfect metaphor for Arundel’s combination of past history and present engagement. The Norman earl Roger de Montgomery would have understood them, as he surveyed his new estates, just as Alastair and Conor understand them as they tackle the issues of today. We wish them every success in their undertakings.