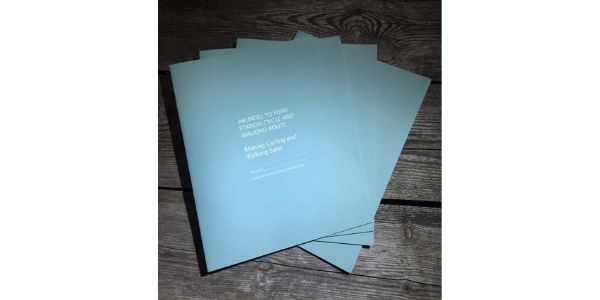 Community leaders including The Duke of Norfolk have come together to sign an open letter to West Sussex County and Arun District Councils calling on them to work together to build a safe cycle and walking route from Arundel to Ford station.

The initiative has come about because of the Love Arundel resident consultations in October 2019 when 200 residents joined town workshops to identify the key improvements they want to see in Arundel. A safe cycle and walking route to Ford station was the Number 1 ask that emerged from those workshops.

Arundel Town Council have responded and have now published a report that shows, despite most residents expecting a new pathway to be built when the A27 bypass is eventually resolved, no such plans exist despite plans to build a bypass and 2,000 houses along the Ford Road.

The report shows that with no secondary school in Arundel around 300 teenagers commute to school. Many use the train from Ford station. Parents know, all too well how dangerous this is and resort to driving them to the station or all the way to school.

As global warming becomes a more urgent issue, the government has committed the UK to become carbon neutral by 2050. The biggest polluter today is the transport sector which pumps out 28% of all greenhouse gases. Cars produce over half that amount and the government has identified that 25% of all car journeys are, like Arundel to Ford station, less than 2 miles long.

So, the government is keen to encourage us to reduce car journeys and switch to walking and cycling for short trips, described as “active travel”.
It says that increasing our “active travel” will help us to be healthier and make an important contribution towards reducing carbon emissions. But, as the report points out, unless it is safe for people to do so, that is unlikely to happen which is why this scheme is so timely and important.

These schemes are never cheap, but there will never be a better time to get this done. Building thousands of houses, construction of the new A27 bypass, extra government investment for exactly this sort of scheme all means that funding could come from several different sources. As the Community leaders say in their letter, “We believe this is a key test of whether local authorities are prepared to work collaboratively to deliver practical improvements for the people whom they represent.”

An online petition has been launched in support and can be found at www.surveymonkey.co.uk/r/fordpath