An Interview with John Inverdale 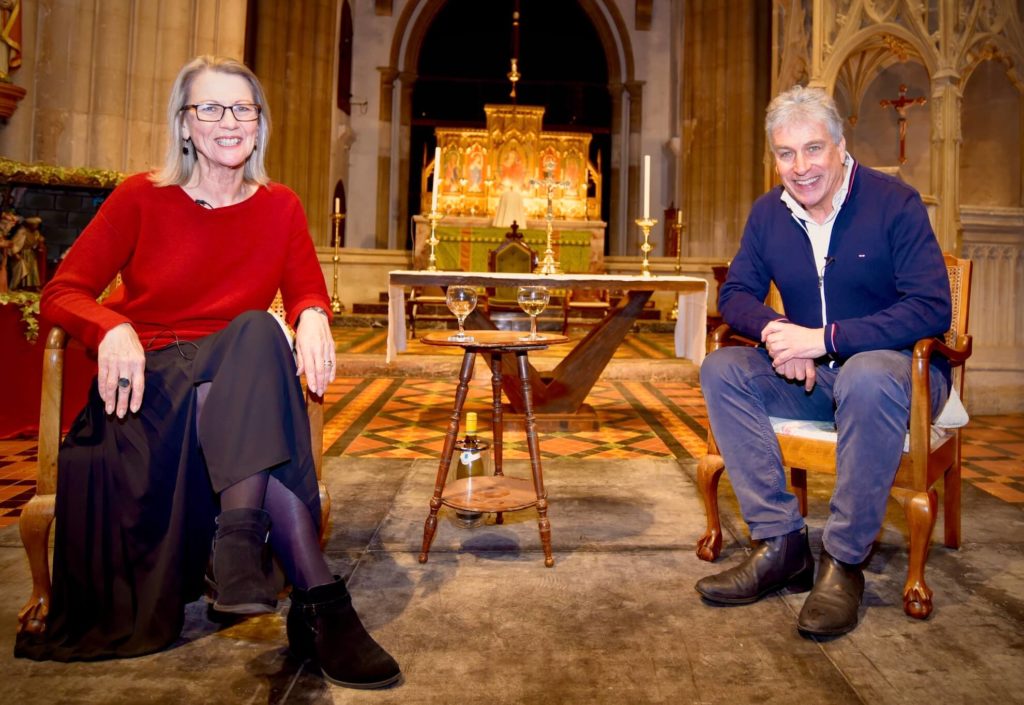 Gill Farquharson reverses roles with sports broadcaster and journalist John Inverdale to find out what lies behind the very public persona. He was also the subject of the Music for a Desert Island evening held at St Nicholas in January.

ON meeting John Inverdale, any idea that he is anything like some of the lurid headlines that have been written about him in his career to date seems wildly inaccurate. He is cheerful and positive, charming and quick-witted. He was born in Plymouth in 1957 to his father, Captain John Inverdale, of whom he says, ‘His great passions were the navy, medicine and rugby- I got one of the three!’ He attended Clifton College as a dayboy and there started to hone his journalistic skills. ‘I knew from about 13 that writing was what I wanted to do, so I became editor of the school newspaper.’

In 1976 university followed at Southampton, where he chose to read History ‘because there were less lectures than in English, which would have been my other choice.’ Between studying he was Captain of the tennis team, played rugby and also edited the student newspaper. He remembers his routine only too well. ‘1500 copies had to be on sale at midday on a Friday in the University Refectory and copy had to arrive at the printers by 9.00am on the Thursday to hit that deadline. I always played rugby on a Wednesday, had too many pints in the bar afterwards and then went into the newspaper office at about midnight and worked through the night- then I’d fall asleep! It was such fun but you were young enough to get away with it. One week the copy turned up at 9.20am however and the printers said sorry, you’ve missed it. I‘ve never forgotten learning that lesson about deadlines’.

Firmly set on a writing career, John followed Southampton with a Postgraduate Degree in Journalism at Cardiff and from there, launched his career with a job on a Lincolnshire newspaper owned by Northcliffe Newspapers. He recalls: ‘Regional press was in trouble at that time – they were the first target for Maggie’s (Thatcher) assault on the print unions. Local papers were closing left right and centre, so I got a lot of rejections. Finally, when Northcliffe offered me a job they asked if I minded where they sent me, I said no!’ He admits that at the time he didn’t even know where Lincolnshire really was and had to consult his parent’s car map to find out.

While there he moved to a job at BBC Radio Lincolnshire, and was there for four and half years. In 1985 he got an attachment for holiday relief at the BBC in London and worked there for 4 months. Filling several more similar temporary roles, he became known around the BBC and a permanent job finally came up on 1st January 1987, double shifting on Radios 2 and 4. ‘The early shift on Radio 2 was 5.00am till 1.00pm and then I used to do the late shift on Radio 4 which was 3.00pm till 11.00pm. I was living in Putney and would leave Broadcasting House at 11.00 pm and get to Putney at 11.40pm, try to sleep and then get back in for 5.00am. I don’t know how I survived it for as long as I did!’

John describes his ambition at that stage as wanting ‘to get somewhere that was just a great place to be. I got an audition to do Sport on Two on Saturday afternoon. I did a six-week chunk and then they asked me to go to Seoul to be the radio frontman at the Olympics and I was off!’

In 1990 he joined Radio 5 which morphed into Radio Five Live in 1995. At the same time, he was on Nationwide, a daytime show, until 1997. He refers to that year as his ‘annus mirabilis’ when he won many Awards including Sony Broadcaster of the Year. During this time his reporting covered just about every sport – notably Wimbledon, the Olympics, Commonwealth Games, rugby, football, athletics, the Ryder Cup, the Open, the London Marathon and of course the Cheltenham Festival. ‘Rugby is my great passion, but I’d put tennis and national hunt racing as close second and third favourites’. This year’s Wimbledon will be the 35th he’s covered for the BBC, although the 51st he’s attended since first queueing overnight in 1970.

Which brings us to the infamous controversy over his comments about Marion Bartoli in 2013 when she won the Wimbledon Women’s Singles title. Read with the benefit of hindsight, it is clear that his intention, although arguably badly expressed, was to praise her determination and single-minded focus on her sport. He says of the subsequent furore that ‘the vitriol and the bile I received was horrible’. Even though Marion herself said in a joint interview they did in Radio Times, ‘In my mind it was never really a story’. John still can’t quite believe that the story was front page news the next day even though Andy Murray had just won the Men’s Singles! ‘When somebody’s got their knives out for you, there’s no stopping them!’ he says now. ‘It was the lowest point of my professional life’ is how he describes it– ‘I just felt like chucking it all in- it was just so vindictive and so horrible.’ The paparazzi were outside the front door and he feels the reaction ‘was disproportionate to the offence.’ He reflects now that it was one of the first times the people that wanted to, had the opportunity to fire a salvo in the gender politics battle. ‘I made a mistake, which I completely accept, but in the context of thousands of hours of live broadcasting, that is one of the risks of the trade. You learn and you move on.”

Subsequent stories nonetheless sought to fan the flames with even the slightest mistake being taken up by the press. For example, the account of Steve Redgrave walking off a BBC commentary at the Rio Olympics because John wasn’t letting him speak is entirely untrue – Redgrave was simply furious at having heard on his earpiece that the Editor had dropped the race he was about to commentate on!

It could be better if I only practised but I think my daughter’s going to get to single figures before I do which is galling!

Time has moved on though and the audience still wants to hear and see him – there was even a Twitter campaign to bring him back to the highlights show at Wimbledon. He’ll be broadcasting for a few more years yet, but he’s reached the stage where getting the work- life balance is more important than ever, and spending time in Sussex at his home near Angmering, becomes ever more important. He plays golf to a handicap of 12. ‘It could be better if I only practised but I think my daughter’s going to get to single figures before I do which is galling!’ He still plays tennis, swims and played rugby till he was 48 but now says ‘In hindsight that was a mistake.’ He explains: ‘ I always wanted to play 1000 games and in my nerdy way I kept a diary of all 963 I played. But then I got jumped on in a game and was pretty badly injured – at one point I thought I was going to lose the sight in one eye – and my girls said enough now, no more, so I stopped.’

He works with several sports charities. ‘Aspire, a spinal injury charity, because one of my best mates at university was an amateur jockey and he broke his back in a fall at Hereford races. He subsequently died as a result of the complications.’ He is Patron of CRY (Cardiac Risk Young) because ‘another friend died of a cardiac arrest on the field when we were both playing rugby. Most countries insist on young people having a heart test when they play sport, but it is still voluntary here. It is surprising how many parents in schools won’t pay £75 to make sure their children are safe from such a risk.’ He is also President of The Wooden Spoon which is a rugby charity which supports children with disabilities to play the game.

And what does his future hold? ‘I’d like to keep broadcasting because it’s been part of my life for four decades, but by 2021 I’ll have been doing the job for 41 years and I think that’s probably quite enough! It will be nice to go to sporting events and not work in 2022 – in a restaurant with a couple of beers with mates!’ ‘I’m also – 40 years too late – learning to play the guitar. To play at the Arundel Festival is my target! I’m just not sure when.’