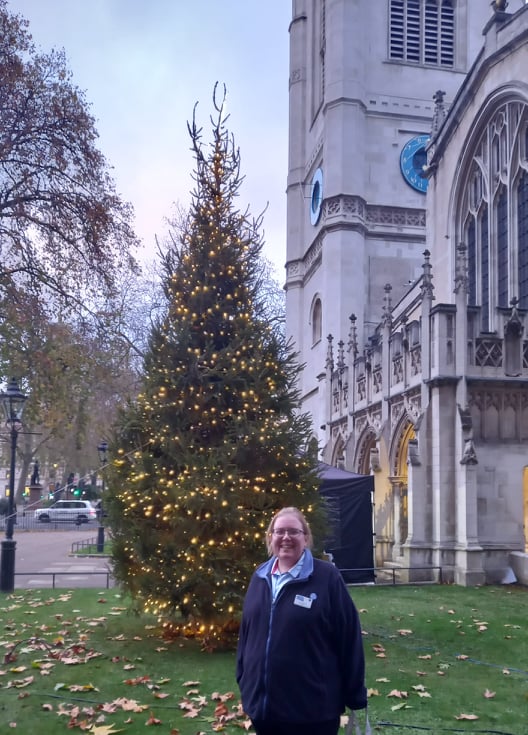 When the Lord Lieutenant’s office invited Arundel Town Council to nominate someone who had supported their community during the Covid-pandemic to be honoured by an invitation to a special carol service hosted by Her Royal Highness the Duchess of Cambridge, the invitation came with a warning that since this was a national event and West Sussex only had 4 places for the whole county, they were unlikely to be chosen. Undeterred the Town Clerk and Mayor immediately identified Rachel Stanford as Arundel’s nominee.

Two weeks before the 1st Arundel Brownies were due to celebrate their centenary, the first lockdown was announced. In the middle of a meeting, Brown Owl Rachel Stanford was told “watch the news… we are going to close”.

Rachel was not going to let that happen. “We couldn’t meet face to face, but we needed to support the girls and keep them motivated for their own mental wellbeing. Some were the only children in their families and might not see anyone but their parents during lockdown”.

The Arundel Brownies and Rainbows were the first group in their district to move on to Zoom. “None of us were very tech savvy, but it’s surprising what you can learn to do”. On Zoom, Brownies and Rainbows made pizzas, held remote sleepovers, decorated Christmas cakes, did craft work, played Bingo, and observed VE Day. “Some of the girls were hit hard by lockdown so we tried to keep their spirits high each week”.

Despite the initial warning that it was unlikely their nominee would be selected, the Town Clerk and Mayor were later delighted to learn that Rachel had in fact been invited to Westminster Abbey for the prestigious carol service.

Rachel attended the Abbey on Wednesday the 8th of December and was delighted to be seated just opposite The Duke and Duchess of Cambridge, Sophie Countess of Wessex, Princesses Beatrice and Eugenie and other members of the Royal Family. Rachel said the service was “a once in a lifetime experience… an amazing opportunity to attend [and] such a good way of getting in the Christmas spirit”.

The carol service hosted by Her Royal Highness the Duchess of Cambridge will be aired on ITV at 7.30pm on Christmas Eve.